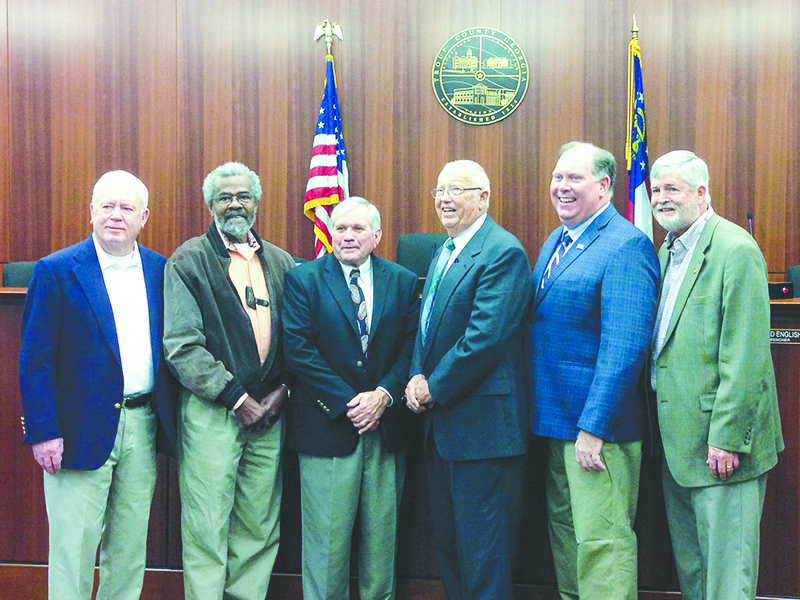 LaGRANGE – On Wednesday, the Troup County Board of Commissioners inducted two new members into their ranks and re-inducted Commissioner Morris Jones for another term on the board.

The new commissioners were both excited to be elected and honored by the support that they received within their districts who they hope to faithfully represent during their terms.

“I’m just honored is all I can say,” said Commissioner Lewis Davis. “… I appreciate the support of the citizens of Troup County. I look forward to serving. That is what this is all about, to be an advocate for the people.”

Davis won former Commissioner Tripp Foster’s seat with 61.6 percent of the vote during the May election, but he has long been an active member of the community. He was the leader of the local Republican party prior to winning the commission seat.

“This last campaign cycle is when I met Lewis (Davis),” said Matt Brass, R-Newnan. “You could really see a true passion for Troup County, and he really loved the people he was trying to represent, and loved the county itself.”

“I’m retired, and my background is utilities, and I’ve been dealing with the public all my life basically, and I feel like this is a natural fit.,” said Cadenhead. “We’ve got a lot to be proud of here in Troup County, and I thank Buck Davis – with being my predecessor – to lead the way and do the things and have the things that we have in Troup County, and I really appreciate that, and just to follow in his footsteps is an honor.”

Cadenhead will be taking the seat that former Commissioner Buck Davis held for 20 years, and he is excited to continue to make a difference in the county.

“Troup County is much, much better off than a lot of the other counties in the state of Georgia,” said Cadenhead. “That shows good leadership stemming from the commission. … Financially, structure, the management and employees are super, and it is good to have good employees, and that is the biggest asset we’ve got here in Troup County.”

“I met Ellis (Cadenhead) when I first started working for Congressman (Lynn) Westmoreland, and he was the director there at the Coweta County Water Authority,” said Brass. “And I was impressed back then with his knowledge of how government works and really his service above self-attitude. … When you’ve got two people with knowledge and a heart for it, you know I think you are going to have good public servants, and I look forward to working with both of them and the county commission as a whole.”

The Troup County Board of Commissioners is scheduled to meet next on Jan. 3 at 9 a.m. in the Commission Chambers at 100 Ridley Ave.