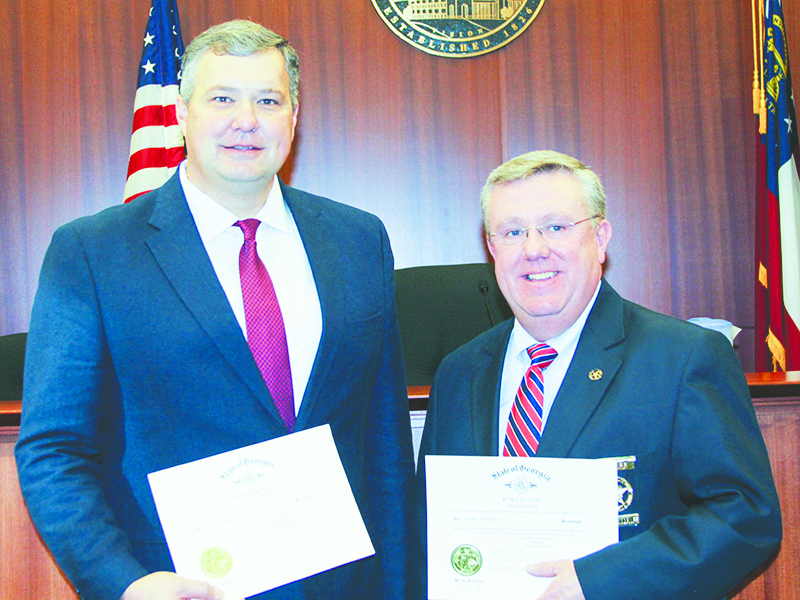 Incoming Tax Commissioner Shane Frailey and Sheriff James Woodruff pause for a photo after the ceremony swearing them into office. (Photo by Alicia B. Hill | LaGrange Daily News)

LaGRANGE – Chambers at the Troup County Commission were standing room only for the swearing-in of Troup County’s new tax commissioner and the re-swearing in of the sheriff and district attorney.

All three positions were voted on in November and will officially take office in January. Incoming Tax Commissioner Shane Frailey replacing Gary Wood, who chose not to run and is retiring  after 16 years in the position. Frailey has already started working with the office and hopes to continue the work that Wood started.

“Everything is prepared and Jan. 3 – we’ve got a great bunch of women working in that office, and that will be just like a normal work day for us,” said Frailey.

The sheriff was also sworn in at the ceremony that was filled with supporters if the photos taken afterwards were any indication. Sheriff James Woodruff won the November election, allowing him to take on his second term in office this year. Among his contributions to the sheriff’s office, he put the power to collect taxes back in the hands of the tax commissioner.

“We’ve had four good years now behind us, and we’re looking forward to the next four,” said Woodruff. “(We) just want to continue to serve the people and truly make Troup County a great place to live and work and raise your family.”

The district attorney was likewise honored to be reelected to his position though he did run unopposed in this year’s election.

The high turnout for the swearing-in was encouraging, and the candidates were glad to see their supporters at the ceremony.

“I was just pleased with the turnout today for the swearing in ceremony,” said Woodruff. “I really appreciated being able to be part of this with Shane (Frailey) our new tax commissioner and with Pete Skandalakis our (district attorney).”