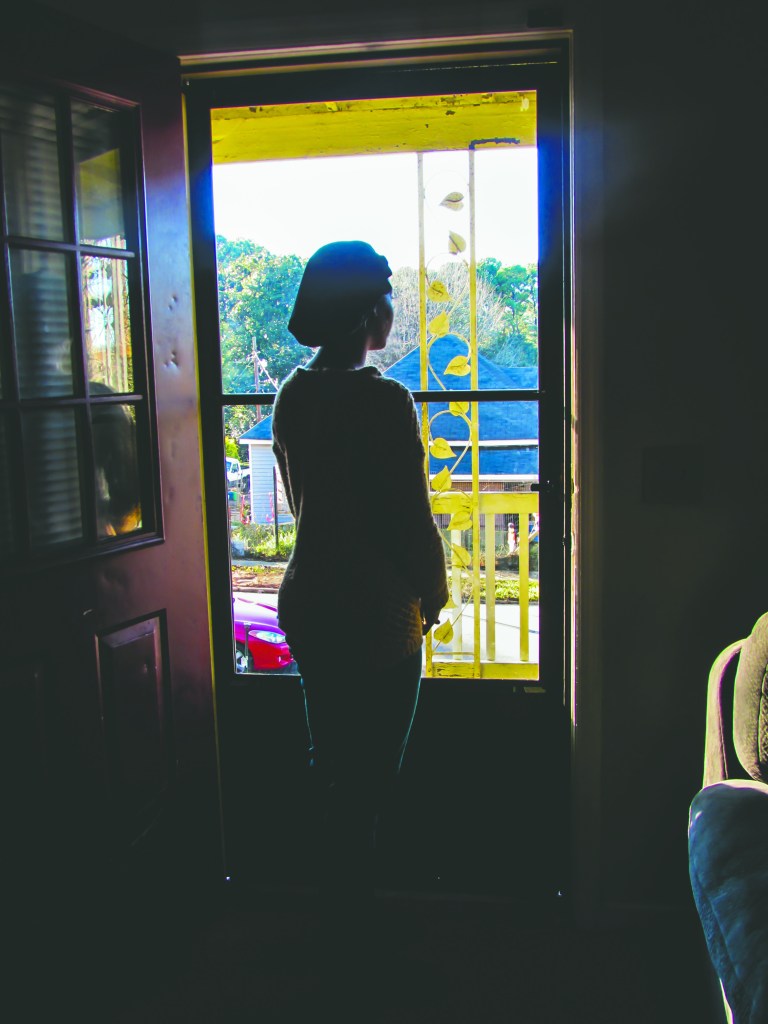 Amanda Smith stares out the front door of the home she may be evicted from any day now. Smith has six children and is contemplating temporarily placing some of them with Safe Families - a program within Twin Cedars Youth and Family Services. (Photo By: Melanie Ruberti | Daily News)

Mother of six fights to keep family together

Editor’s Note: Names have been changed to protect the identities of the families and children.

LaGRANGE – The new year may begin a new chapter in some people’s lives, but for others, like *Amanda Smith, it is another day of worry and desperation.

Amanda is the mother of six children – all boys, ranging in age from 8 years old to two weeks old. She recently lost her job, is being threatened with eviction and has no mode of transportation.

“I don’t have any options right now,” Amanda said. “I’ve been selling things off inside the house just to make rent. But I fear the Marshals (Office) will be here any moment with an eviction notice.

Amanda will have some stability starting Tuesday, when she begins orientation for a new job. But the issues of transportation, childcare and a place to call home still loom in the distance.

“I pray every day, but I finally got down on my knees one day and prayed. My friend *Jean immediately came to mind,” Amanda said. “I called her, told her about the situation, and we cried. Then she told me about Safe Families.”

Safe Families for Children is a program that falls under the umbrella of Twin Cedars Youth and Family Services. It started in Troup County in August 2014, and helps families and children through hosting, mentoring and counseling.

The children, with consent from the primary parent, are temporarily placed with host families, stated Safe Families coordinator, Candi Gibson. The host families are carefully screened and subjected to several background checks.

The group, guided by state law, will step in when a family is in crisis and isolated from relatives or friends. Gibson said it might be a situation like Amanda’s, where the parent needs a short respite to become financially stable, or a parent is hospitalized and has no one to care for their children.

“She’ll (Amanda) have support too and that’s a big deal,” said Gibson. “… We’ll stay with her and help her, like getting her into a Circles of Troup class. The host families will mentor her…”

The parent can see their children and retain custody of their kids anytime they want to, Gibson added, meaning with the Safe Families program there is no binding contract or legal obligation like there is with the Department of Family and Child Services (DFACS).

Jean went through a similar situation as Amanda a year ago. The Daily News spoke with her in December 2016, two months after she said goodbye to her two youngest children — ages 4 and 1 — and allowed Candi Gibson to temporarily place them in the hands of two loving, yet completely unknown families she had never met before.

As hard as it was, a year later Jean said it was the best decision she ever made.

“In the beginning I was scared. I thought, ‘How can I let my kids go?’ But I knew I was doing the best thing for them … and it worked out,” she stated. “I was able to move into more stable housing, found a job that was more conducive to my children’s schedules.”

On January 1, 2016 – just in time to start the new year – Jean was happily reunited with all three of her children and living under one roof.

But she never forgets about Gibson and the Safe Families program – or the host families whom she referred to as her “guardian angels.”

“I had support from people that I just met, versus my own family,” Jean said. “They always called me or text me. It was depressing. I went through a birthday, Thanksgiving and Christmas without the kids. But the host families helped. They motivated and encouraged me … I still communicate with the host families. We go to lunch or dinner and sometimes church … now it’s smooth sailing.”

It is the same outcome Gibson is hoping for Amanda. The group is diligently looking for new housing for the mother of six, plus a way for Amanda to get back and forth to her new job.

“We need host families and volunteers. Imagine a family just providing transportation for Amanda so she can get some paychecks under her belt and fix her car,” she stated. “We are one of the few groups that doesn’t require money, we just need more people and their time.”

The program would be a big help for Amanda – and a big step for her as well.

“I don’t want to be split up from my kids. It terrifies me to split them up,” she stated. “But I just want to get stable (financially) so my kids are stable. This is taking an emotional toll on them too … and I don’t want that for them.”

Safe Families is looking for host churches and more host families to be involved in the program. Training, background checks and more will be required for those who want to participate in the organization.

Anyone interested in learning more about Safe Families is asked to contact Candi Gibson at 706-298-0050, ext. 1073, or cgibson@twincedars.org.