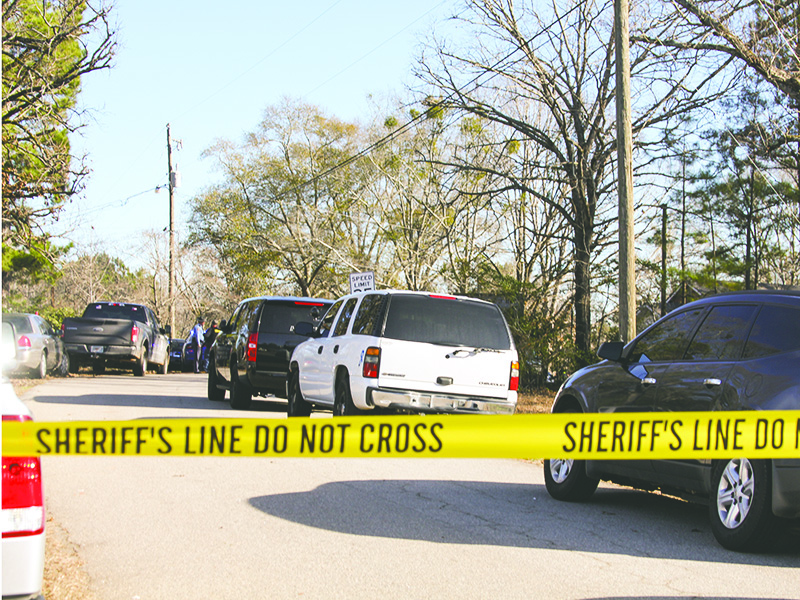 Troup County deputies, along with lawmen from LaGrange, West Point and Alabama, are at the scene of a standoff off Samples Road near West Point. (Alicia B. Hill | LaGrange Daily News)

WEST POINT – Troup County deputies, along with lawmen from LaGrange, West Point,  Alabama and other state agencies, brought a man into custody at 6:25 p.m. Monday after a stand-off on Jackson Street near West Point that lasted nearly seven hours.

“He was taken into custody without incident,” said Troup County Sheriff James Woodruff.

Matthew Edmondson, 28, will be taken to the Troup County Jail after being treated at WellStar West Georgia Medical Center for a gunshot wound to the shoulder he sustained earlier in the day.

Edmondson was injured when he allegedly shot Deputy Matthew Hockett at about noon Monday when Hockett responded to the house as part of a welfare check on Edmondsoon.

Hockett was called to the house in the first block of Jackson Street about noon by Edmondson’s family members because Edmondson had a psychiatric issue. Woodruff said when Hockett reached the gated driveway he got out of his car to walk around the locked gate and reach the house. He heard what he thought was a banging noise and turned to find the man later identified as Edmondson shooting at him.

Hockett ducked behind a stump and was able to return fire, injuring Edmondson. Hockett was grazed by buckshot, Woodruff said. He was taken to WellStar West Georgia Medical Center, treated and released late Monday afternoon.

Edmondson retreated to the house and holed up in a back bedroom. His mother was able to sneak out of the house and open the gate, letting law enforcement in. No one was in the house during the standoff.

LaGrange SWAT, the Columbus police bomb squad, Georgia Bureau of Investigation and other agencies all were called in to assist, resulting in about 50 law enforcement officers on the scene throughout the afternoon.

“The only motive he gave was that he thought the deputy had no right to be out there and he was trying to protect the family farm,” Woodruff said.

The sheriff said deputies had been called to the house on prior occasions because of Edmondson’s mental state but it had never escalated before. He had met Edmondson prior to Monday; Edmondson and his mother came to the sheriff’s office to talk with him about an issue unrelated to his mental health.

Neighbors, some of whom gathered along nearby Samples Road to wait out the stand-off in the cold, were surprised to hear what happened.

Christopher Duck said he lived in the normally quiet neighborhood for five years and was surprised, when he heard gunfire, to find out a deputy had been shot.

“I was really surprised when I found out who (the shooter) was,” Duck said. “He’s a good guy. He’s always laughing and cutting up.”

Hockett had started his career with the sheriff’s office as a jailer and had only been a deputy on the road for about two years.

“He’s a sharp young man,” Woodruff said. Hockett had been re-sworn in as a deputy Monday morning as part of the sheriff’s swearing in of all his deputies at the beginning of his term.

“I’d just told everyone this morning, whatever you do out there be careful,” he said. “This can happen anywhere. Officers everywhere need to be vigilant.”

Law enforcement waited out Edmondson throughout much of the afternoon and at first couldn’t get him to respond to negotiators. He eventually left the house unarmed – Woodruff said several pistols and long rifles were in the house but it’s not known who they’re registered to – and surrendered in the yard after talking with friends on the telephone.

Lawmen not rushing in helped the incident end peacefully, Woodruff said, along with the encouragement he got from friends on the phone.

Hockett will be on administrative leave pending an investigation of the shooting by the GBI, Woodruff said.