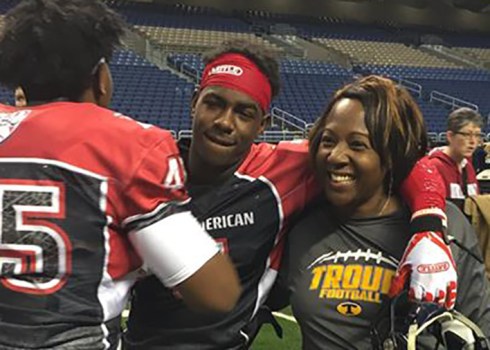 LAGRANGE – The field for the U.S. Army All-American Bowl in 2020 won’t be set for nearly another three years.

One roster sport has already been taken, though.

On Saturday, Hudson was one of the participants in the FBU Freshman All-American Game in San Antonio, and he put on quite a show.

Hudson not only had a touchdown catch in the first half, but he returned an interception return for a score late in the game, and he also excelled during the week of practice leading up to the game.

“It was a good experience,” Hudson said. “I saw a lot of talented players, some better than me. It made me work harder.”

The officials from the Army All-American Bowl had set aside one roster spot in the 2020 game for a standout player from Saturday’s all-star game.

On Tuesday, it was announced that Hudson was the man, and he’ll be on the field in January of 2020 for the game along with other players who will be seniors that year.

On Tuesday morning at Troup, Hudson gathered with family members and his coaches to participate in a teleconference with officials with the All-American Bowl, and he was informed of his invitation to the elite game.

The announcement capped what has been an eventful few days for Hudson.

First came Saturday’s game, and he delivered a big-time performance, showing off his skills as a wide receiver, and a defensive back.

On Sunday, on the heels of that performance, Hudson received scholarship offers from the University of Georgia, Auburn and Appalachian State.

Then two days later, he found out that he’ll be a participant in one of the country’s elite all-star games.

Hudson will be the second Troup player to compete in the All-American Bowl.

Previously, offensive lineman Chris Burnette played in the game, and he went on to enjoy a successful career at the University of Georgia.

Hudson is coming off a phenomenal freshman season at Troup where he had nine touchdown catches and returned an interception for a score during a key region win over Sandy Creek.

Hudson will be a part of a talented Troup football team next season, and once again he’ll be catching passes from Montez Crowe, who will be a senior.

At the moment, Hudson is a member of the Troup basketball team that played rival LaGrange on Tuesday.

Callaway freshman MJ Robertson also played in the FBU Freshman All-American Game, and he was named the defensive MVP for his team.