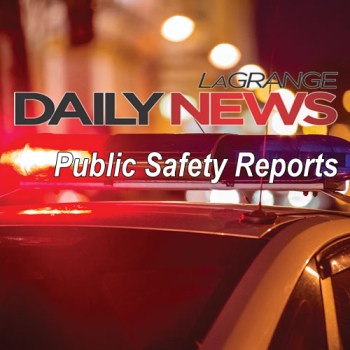 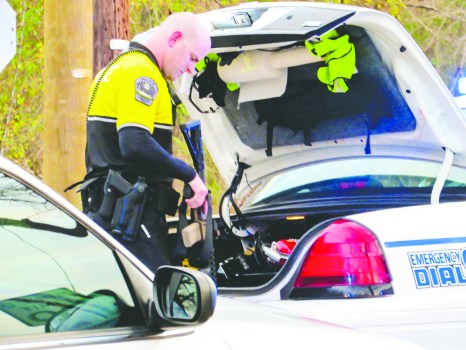 LaGrange Police Officer Brady Pike places his weapon inside his patrol car during a call for service on Wednesday. LaGrange Police was originally dispatched out to a person who was possibly shot. The call ended up being a fight between two people; one whom allegedly drew a gun, stated LPD Lt. Dale Strickland. No weapons were found and no one was hurt. (Photo By: Melanie Ruberti | Daily News)

One man was taken into custody around 1:30 a.m. on Wednesday for reportedly breaking into a car and stealing a woman’s purse.

The incident happened at the Citgo gas station at 103 Commerce Avenue around 11:30 p.m. Tuesday night and was caught on the store’s surveillance cameras.

The victim told LaGrange police officers she was approached by three men who asked her for money, according to the report.

After she went inside the store, the victim then saw one of the men open her passenger side door, take her purse and run off, the report stated.

LPD detectives were able to identify the suspect by video. He was identified as Antonio D. Harris, stated the police report.

Harris was arrested at a home in the 100 block of Ward Street a few hours later and charged with theft – entering auto.

A woman told LaGrange police someone broke into her home in the 200 block of West Crovat Street on Tuesday.

A PlayStation 4 and three games were missing from the house, the report stated.

The items were valued around $530.

An alleged fight between two people in the Lucy Morgan Homes off Glenn Robertson Drive drew a crowd and LaGrange police on Wednesday evening.

One of the victims allegedly told police the other person drew a gun at some point during the argument, said Lt. Dale Strickland, commander of the LPD Criminal Investigation Unit.

Officers did not find any weapons inside the house, nor in the yard or cars owned by the complainants, Strickland added.

No word if either party will be charged.