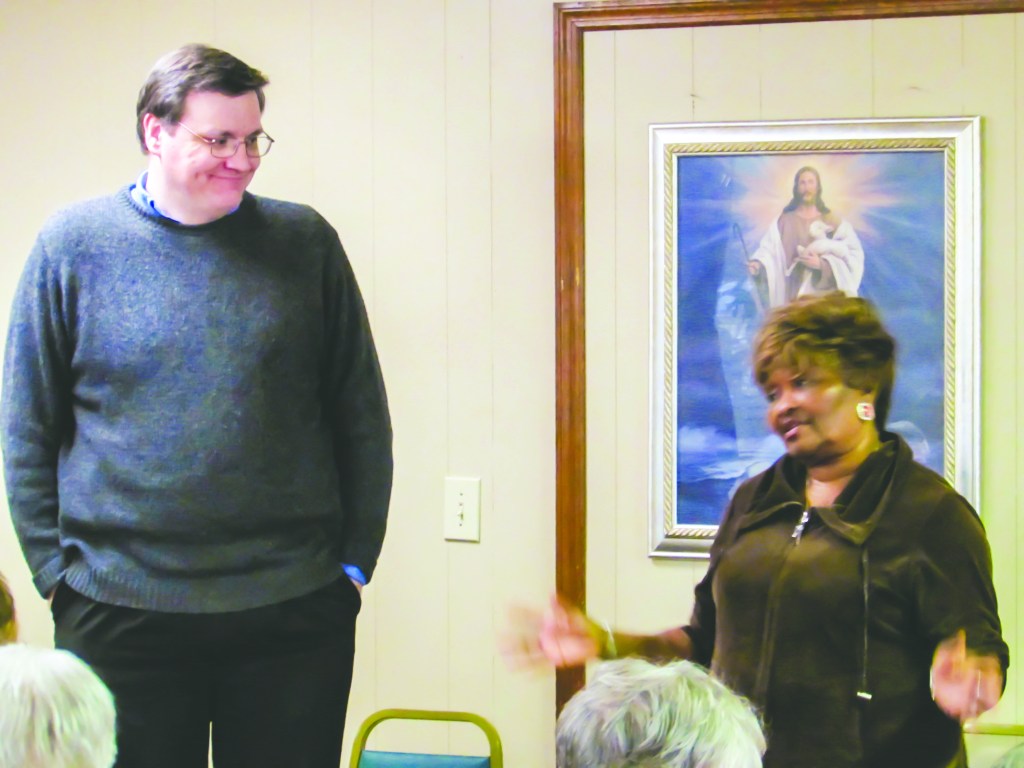 Wesley Strickland, left, and Bobbie Hart tell the story of Austin Callaway's brutal death at the Ark Refuge Ministry on Tuesday. Strickland and Hart are co-coordinators of the group Troup Together.

LaGRANGE – The story of Austin Callaway’s death is complicated and until now mostly untold. But one local group believes telling the story of the African-American teen’s murder in the 1940s is important to healing the community in 2017.

That organization, “Troup Together,” held a luncheon with members of local churches Tuesday to share what they believe is the story behind the unsolved murder. The group, led by Wesley Strickland and Bobbie Hart, is hoping more people will understand why it is important to acknowledge the apparent killing and cover up of Callaway’s death.

The facts on the killing in 1940 came from many different archival sources, including records from a group called the Council on Interracial Cooperation, or CIC, which was based in Atlanta, Strickland said.

In 1940, the CIC sent investigators to LaGrange to determine what happened regarding the killing of Callaway.

“We can’t change what happened in that generation,” Hart told the crowd. “But we can say, ‘What can we do to make it better for today’s generation?’ We still have a crisis going on with the young men in our community.”

Callaway’s death has come to the forefront of public discussion as LaGrange Public Safety Director Lou Dekmar, Mayor Jim Thornton and several city leaders are set to publicly acknowledge the teen’s kidnapping and murder during an event Jan. 26 at the Warren Temple United Methodist Church at 416 East Depot Street at 6 p.m.

“I have not felt any pushback from people about the event, but I have had inquiries into why I want to do this … this happened a long time ago,” Dekmar said in a previous interview with the Daily News. “For those who believe it is past history, I would remind them that I had comments from the African American community … that the incident is a ‘living history.’ For those who are cynical, this event is an opportunity to have a dialogue that that hasn’t happened yet. It gives us a chance to improve relationships within community, within races and allows us to move forward as a community that is united and not divided … I would invoke the St. Francis prayer ‘seek to understand.’ We want to build trust. The event is an opportunity to close that chapter and start a new one.”

Callaway’s death took place in September 1940. While records are incomplete, Strickland said the Equal Justice Initiative in Alabama provided most of the research and details known today. Those events, while still muddy, paint a clearer picture of the atrocities Strickland and Hart believe were committed against Callaway .

According to the Equal Justice Initiative , Callaway was allegedly accused of assaulting a white woman Sept. 7, 1940, an act that was never defined in a police report or witnessed by another person.

“An African-American man accused of assaulting a white woman would include making eye contact with her or not stepping off the sidewalk as she walked by,” Strickland said. “The legal term was so broad back then.”

Callaway was reportedly apprehended by another African-American man who heard the woman scream and ran to her aid. Strickland said neither the names of the Good Samaritan” or the victim are known to this day.

The teen was turned over to the LaGrange Police. Officers escorted him to jail, which at that time was located in the basement of City Hall. Around midnight, almost all the police officers responded to a fire at the Swift and Company fertilizer plant, leaving just one person to man the city jail, Strickland said.

The jailer was alone when at least six white men appeared with weapons at the jail around 2 a.m. and demanded Callaway be released into their custody, Strickland told the crowd, adding that the jailer did as he was told.

According to Strickland, the teen was then driven out to Liberty Hill Road and shot multiple times.

Strickland said a passer-by discovered Callaway and took him to the city hospital, where he later died. People still are not sure where Callaway was buried.

“I felt a wave of emotions … I felt sadness and sorrow. But I also felt the need to repent and forgive those who committed this heinous act. I asked the Lord to forgive those men,” Hart said.  “A lot has not been dealt with in Austin’s death … there’s still a lot of emotions,” she continued. But forgiveness is freedom. We can forgive.”

Both Strickland and Hart commended Dekmar and the decision to make a public statement about the teen’s death.

“We have seen where a community’s apology can help people heal,” said Wanda Walker, head of Troup Transformation. “We have seen God move and make great, positive changes. The acknowledgement will be a good thing for our community.”

The EJI is also helping Troup Together place a permanent historical marker for Austin Callaway at Warren Temple in March.