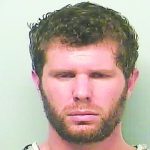 The man accused of shooting a Troup County Sheriff’s deputy on Jan. 9 has been released from a Columbus hospital and formally charged in the incident.

28-year-old Matthew Edmondson is accused of shooting Troup County Deputy Michael Hockett when Hockett went to Edmondson’s house on Jackson Street near West Point to perform a welfare check. Hockett, who was hit several times with buckshot from a gun Edmondson had, shot Edmondson in the shoulder, resulting in his hospital stay.

Hockett was treated and released from the hospital on Jan. 9.

Edmondson was released from the hospital Friday afternoon and was booked under the following charges: criminal attempted murder, possession of a firearm during the commission of a crime, aggravated assault with a gun, false imprisonment and two counts of interference with government property.

He is being held at the Troup County Jail without bond.