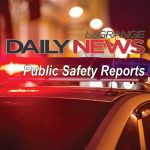 Investigators with the LaGrange Police Department are searching for a man who attacked his ex-girlfriend inside a bathroom at the Texaco gas station at 1616 Whitesville Road just before 1 a.m. on Monday.

The man then stole the woman’s car and took off, the report stated.

According to the victim, she and her ex-boyfriend were arguing inside her car when she decided to pull into the Texaco to use the bathroom.

The woman told police her ex-boyfriend then allegedly followed her, forced his way inside the bathroom, hit her. grabbed the car keys and left in her vehicle.

LaGrange police officers were unable to locate the man as of Monday afternoon, according to the news release.

Investigators issued arrest warrants for the man and charged him with robbery by force, auto theft and battery – all under the Family Violence Act. The man is also being charged with criminal trespass for damage he caused inside the store, added LPD investigators.

A fire that damaged a home in the 100 block of Nevada Street has been ruled arson by LaGrange fire marshals and police investigators.

Firefighters with the LaGrange Fire Department responded to the blaze around 8 p.m. on Sunday.

They brought the flames quickly under control and upon further investigation discovered the fire was intentionally set, a news release stated.

No one was hurt in the blaze.

Anyone with information regarding the incident is asked to call the LaGrange Police Department at 706-883-2603 or Troup County Crime Stoppers at 706-812-1000. Callers can remain anonymous.