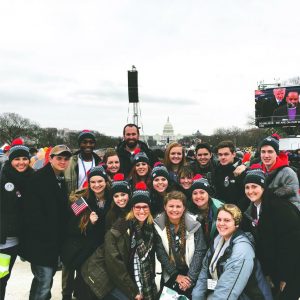 A group of 15 AP history students from Troup High School capped off a whirlwind eight-day trip Friday by witnessing the inauguration of President Donald Trump.

“We were on the National Mall, so we were right there in the midst of it,” said Michelle Ashmore, the AP government and economics teacher at Troup.

The trip included stops in Boston and New York City before the students reached the nation’s capitol. They got up at 4:30 a.m. Friday to make it to all the festivities surrounding the inauguration.

“We got to see three different incredible cities and all the history and excitement,” Ashmore said. “Every city had its own hustle.”

The entire trip was an “awesome eight days,” she said. The students are sophomores and seniors.

“It was jam-packed, and we saw everything we could possibly see,” she said. “Everything we saw, the students were able to relate back to class.”

The students were in the best spot to witness the country’s patriotism and swearing in of the new president, she said, but it took some work. News reports about the lack of a crowd at the event were misleading.

“Security was amped up and there were a lot of people,” she said. “It was tough to get in.”
The group waited more than three hours at one check point and there wasn’t a lot of good signs to guide people where to go. They finally got to a gate all the way back at the Washington Monument, but were told if they found a closer gate, they’d have to go through another security point and all be checked again. Ashmore said the students didn’t hesitate and ran to a closer gate to get a better spot to see the ceremony.

The next morning, the students were still in Washington D.C. when crowds arrived for the Women’s March.

“It was neat for the students to see both events, then see the media’s coverage,” she said. “The kids were able to see that wasn’t the feeling at all.”

Ashmore took her students to Europe last year to visit World War II battle fronts and would like to take students on a trip at least every two years. She’s already planning for the next inauguration in four years.

The students were joined by a group from Coosa High School in Alabama and another Troup High School teacher, Kayla Yeargin.

“I’m thankful to the school administration for their support and allowing my students to see democracy in action,” Ashmore said.