‘Never give in to hate’ 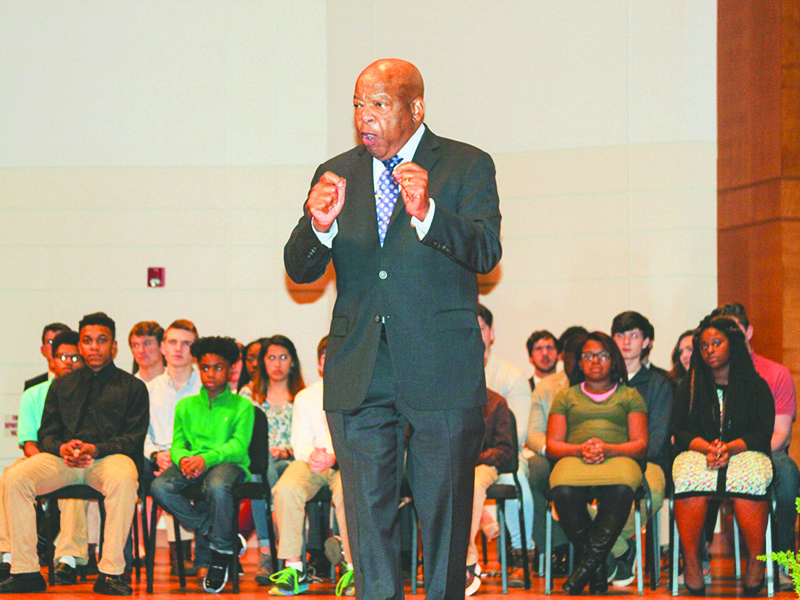 LaGRANGE – There wasn’t an empty seat in the building when U.S. Rep. John Lewis, D-Atlanta, took the stage at LaGrange College’s Callaway Auditorium on Thursday to deliver a rousing speech about his experiences in the civil rights movement and his personal friend, Dr. Martin Luther King Jr.

Lewis was invited to the college to give the annual Martin Luther King Jr. address. The college faced some criticism from alumni when the announcement of Lewis’ address was made during the same weekend as Lewis’ statement regarding President Donald Trump’s election and his decision not to attend the inauguration. But the college – who has a good, long standing relationship with the congressman – felt that the prominent civil rights activist was a fitting speaker for the ceremony in honor of King.

“As we gather together to celebrate the life of Martin Luther King, Jr., it is one of the great honors of my life to introduce a man who has been called one of the most courageous persons the civil rights movement ever produced,” said LaGrange College President Dan McAlexander. “… In a day and age in which words can achieve and so often are not backed by action, John Lewis’ life serves as an inspiration. He has been the very model – literally, considering how many marches he has participated in – of walking the walk, and not just talking the talk.”

Lewis has been arrested 40 times for protesting  over the course of the civil rights movement including during the event known as Bloody Sunday.

Lewis first met King in spring of 1958, and they developed a lasting friendship that went on until King was assassinated in 1968.

In Lewis’ lifetime, segregation of everything from schools to waiting rooms has ended and voting rights have been won – through the Voting Rights Act of 1965 – but that freedom and those changes were hard won. He was beaten and arrested for protesting on multiple occasions. Despite these acts of violence against him, he encouraged the audience to never give in to hate.

Not giving into hate did not mean giving up according to Lewis, though. Instead, it meant rising above to make the world a better place.

“Never give up,” said Lewis. “Never give in, so when you see something that is not right, not fair, not just, you have a moral obligation to speak up. We all have an obligation – a mission and a mandate – to do what we can to make our country and the world community a little more peaceful.”

The events that Lewis related in his speech show how far the U.S. has already come in the last few years, while remembering that the country still has room for improvement even now.

“… We are celebrating not just today,” said Professor Linda McMullen in her invocation. “We are celebrating the future that we are all looking forward to. Lord, we thank you for sending us leaders at the college, in the city, in the county, Lord, who want to move forward together. Leaders who want to serve and help us build bridges and not build up walls.”

Lewis recently received four awards for his book “March: Book Three,” which along with its debut as the number one on the New York Times bestseller list, has also become encouraged reading for students learning about the civil rights movement, like those who attended the college-sponsored event.

Organizers from the college estimated that about 770 people were able to hear Lewis speak in the auditorium, and an additional 170 people listened to Lewis through a live stream at an overflow venue nearby. The rumored protestors who had complained over Lewis being the speaker due to Lewis’ recent spat with Trump on Twitter did not show up at the event.