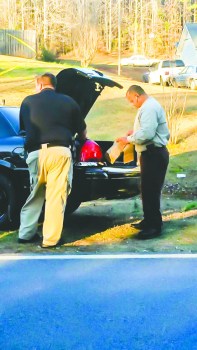 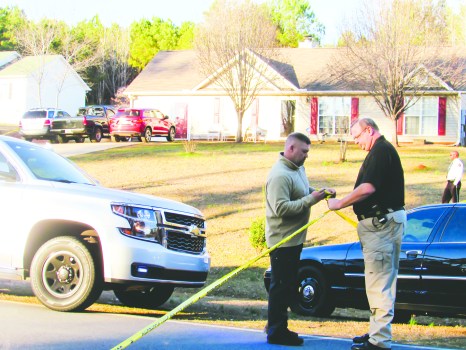 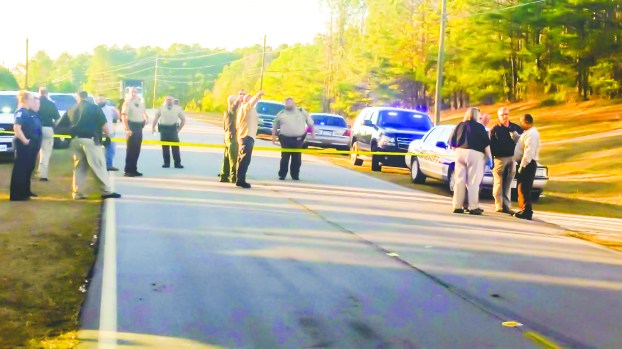 TCSO deputies and investigators confer with each other outside the home on Hines Road Tuesday afternoon. (Photo By: Melanie Ruberti | Daily News)

LaGRANGE – A father is dead and his daughter continues clinging to life at an Atlanta area hospital Tuesday evening.

The woman, identified as Kiley Thompson, 24, was shot at least once in the chest just before 4:30 p.m. inside a home in the 700 block of Hines Road.

It is still unclear how her father, identified as James Thompson, 44, died.

Deputies with the Troup County Sheriff’s Department initially responded to the home through a 911 dispatch for a ‘man with a knife,’ said Sheriff James Woodruff.

The caller then allegedly advised emergency dispatchers the suspect had a gun inside the home and ordered family members to leave the residence, Woodruff said.

For reasons not released to the media, Kiley Thompson stayed behind inside the house.

Both Kiley and James came out of the residence; Kiley was immediately treated by EMT’s on the scene and quickly airlifted to an Atlanta hospital, according to TCSO officials.

Deputies attempted to take James into custody, but he reportedly continued to struggle and fight with law enforcement officers, Woodruff stated. The man then suddenly collapsed and died at the scene, according to the sheriff.

Woodruff said as of Tuesday night, law enforcement officials were, “unsure of why and how he (James Thompson) died.”

The sheriff called in the Georgia Bureau of Investigation to take over the case. Investigators arrived around 6 p.m. on Tuesday to process the scene.

The body of James Thompson will be sent to the GBI’s crime lab in Atlanta for an autopsy.

A man standing outside the crime scene tape identified himself as James and Kiley’s uncle but would not give his name.

He told the Daily News he received a phone call from a family member stating James allegedly “had her (Kiley) in a hold around the neck and was holding a gun.”

By the time the man drove to the home, the shooting had already occurred, he said.

Kiley Thompson’s condition was not available as of press time on Tuesday.