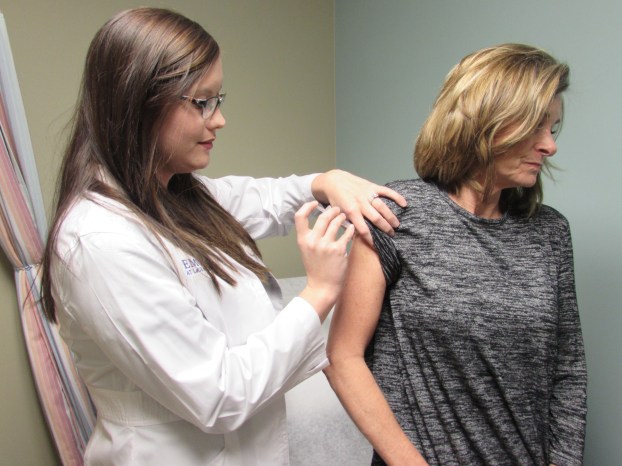 Emmie Norrell Longshore, a family nurse practitioner at Emory of LaGrange, prepares to give a patient a flu shot on Monday. (Photo By: Melanie Ruberti | Daily News)

Flu virus is sticking around

LaGRANGE – Family Nurse Practitioner Emmie Norrell Longshore has seen a steady flow of patients in and out of exam rooms at the Emory at LaGrange medical center off Smith Street.

The majority of her patients complain of flu-like symptoms: fever, body and muscle aches, fatigue, headache, nasal congestion, cough or a sore throat.

“When you get it (flu), it can be horrible,” Longshore said. “You can tell people just feel really bad.”

About 75 percent of those folks who felt sick tested positive for the virus, Longshore said.

“I’ll ask them when their symptoms started,” she said. “If it is within two days, I’ll give them anti-viral medication to try. But I also educate them if any family members start to have symptoms, they should come in right away.”

Anti-viral medications will only help affected patients up to two days after they begin having symptoms, she added.

The flu virus can spread from an infected person one day before they start to show any symptoms, up to one week after their symptoms are gone, Longshore explained.

The virus has far reaching effects, too.

The flu shot is the number one way to protect yourself from the virus, according to the Centers for Disease Control website. The shot is recommended for children 6 months and older, including pregnant women. But patients should consult with their doctors first.

“… especially in places you might not think about, like the before using the buggies at Walmart or a grocery store. Or after touching the handles on the bathroom door,” she added.

“Flu season” is typically from October to March, said Longshore, but it can ebb and flow, with some months being more active than others.

The virus is nothing to sneeze at either. According to the CDC, since October 1st, thirty-three adults were hospitalized because of the flu. During the same time period, 15 children died from the virus, stated the CDC website.

If you do get sidelined by the flu, drinking lots of fluids is one of the best remedies to get on the road to recovery, Longshore explained.

“Stay hydrated … people don’t realize how fast you become dehydrated, especially kids and the elderly,” she said. “You can also treat symptoms with over-the-counter medications like Tylenol or Motrin … and stay home. Stay away from as many people as you can. Keep your kids at home too, if they are sick.”

The good news, if there is any during flu season, is folks can still get their anti-viral shots up until March, Longshore said.