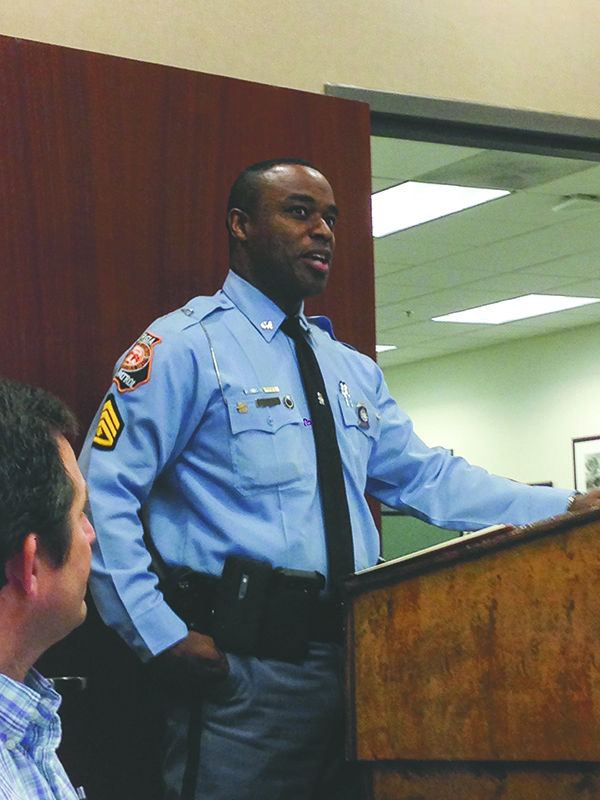 Sgt. Maurice Raines updates the Troup County Board of Commissioners on the Georgia State Patrol’s activity in the county at a work session on Friday. (Photo by Alicia B. Hill | LaGrange Daily News)

LaGRANGE – The local Georgia State Patrol office is currently looking for more people to apply to be troopers and help keep the roads safe, but the severe lack of applications is making it hard to keep up with the retirement rate of older troopers.

Previously, the Georgia State Patrol had difficulty with recruiting due to low pay, but the troopers received a 20 percent raise at the beginning of this year thanks to a budget proposal introduced by Gov. Nathan Deal back in September. The raise brings Georgia State Troopers to the middle of the range for state trooper pay across the country and above the pay of many local law enforcement agencies.

“The state patrol is trying to make up for lost time,” said Sgt. Maurice Raines. “We – as an agency – in 2009 when the budget crunch happened we lost trooper schools, which meant manpower went down.”

The state has now gone back to hosting multiple GSP Trooper Schools a year in Forsyth, with the school consisting of 18 weeks at the academy, 12 weeks of in-the-field training, then a week back at the academy to prepare for graduation for a total of approximately 1,500 hours of training at the completion of trooper school. The time in school is paid, and with the raise Raines is hopeful that more candidates will apply to become state troopers.

“I would say within the next two years, hopefully we will be within capacity,” said Raines.

The local GSP office covers Troup and Harris counties on local roads as well as the interstate and a major part of the job is going to the sites of traffic crashes. According to Raines, the troopers worked about 1,200 wrecks a year in Troup County last year alone with 22 fatalities. In the previous year there were only 11 fatalities.

“The fatalities here in this area are very sporadic,” said Raines. “It is not the interstate; it is not just two-lane roads (where accidents occur); it is just sporadic. We can’t put our finger on why it’s happening where it’s happening… Research shows back since 1950, they were working 16 fatalities (a year) just in Troup County, so that is norm that it is a dangerous area as far as driving, and the reason being you’ve got a lot of people from up north going south on I-185 and I-85.”

Troup County has one of the longest sections of interstate in the state, and Raines attributes part of the danger in the county section to the lack of a physical barrier in the median of the interstate, though he credits many accidents to distracted drivers as well.

“The biggest problem that we have in Troup County with traffic crashes is distraction,” said Raines. “Most of our wrecks are going to be following too close and strike somebody in the rear, or they pull out in front of somebody. Those are the two main contributing factors here. It is either (they are) on that cell phone or ‘I look down for a moment, and when I looked up I didn’t realize a car had stopped.’”

The state patrol tries to make the roads safer by having a visible presence as much as possible considering their limited staffing, but with that presence comes fines for speeding and unsafe drivers.

“Just last year alone, we put over $400,000 in your coffers for revenue,” said Raines. “All the citations that are written in any community that we work in, it goes back to that community. It doesn’t benefit the Georgia State Patrol at all. … Citation-wise, we don’t like to write tickets, but we do. We believe that that is our responsibility. Sometimes citations are used to combat an issue.”

The state patrol wrote more than 1,000 tickets in Troup County last year according to Raines, but covering wrecks and writing tickets are not the only things that the state patrol does. As an assisting agency, the state patrol assists the sheriff’s department and other local law enforcement as needed and does take into account road concerns brought up by county officials.

“We are here to help you,” Raines told the Troup County Commission on Friday. “That is what our agency is all about. We are an assisting agency, and we want to help with what we can help.”

In order to apply for the Georgia State Patrol, go to https://dps.georgia.gov/georgia-state-patrol-trooper.

Flu virus is sticking around