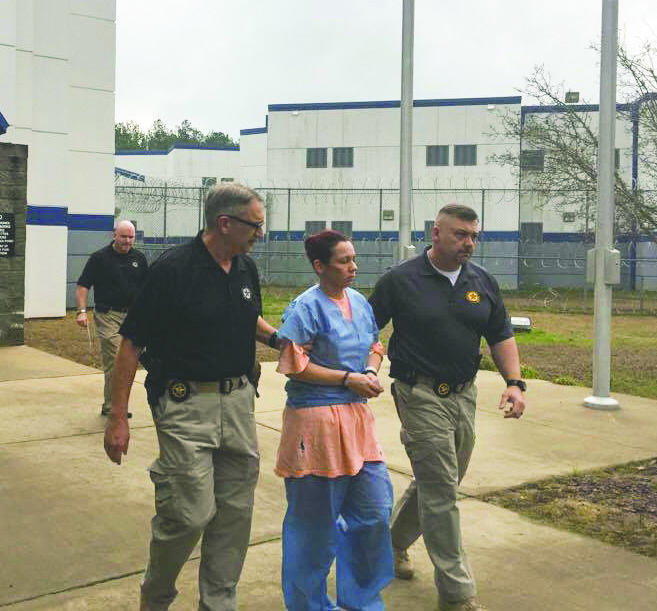 Investigator Mike Caldwell, left, and Chief Deputy Jon Whitney, right, escort Mary Rice to a waiting vehicle outside the Troup County Sheriff's Office. Rice, who surrendered Tuesday night after a nationwide manhunt for her and William Boyette, is being extradited to Escambia County, Fla. Rice said nothing as she left the sheriff's office. Photo by Jennifer Shrader | Daily News

They were supposed to check out of the West Point Motel Wednesday morning.

Instead, Mary Rice is on her way to Escambia County, Fla., to face charges and her companion William Boyette is dead of a self-inflicted gunshot wound after a standoff with local, state and federal authorities.

The two had been on the run after a spree of killings in Florida and Alabama that began Jan. 31.

Danny Patel, the manager of the West Point Motel, said his aunt did not suspect a thing when she checked the pair into the motel around 2:30 p.m. Monday.

“My aunt had no idea who they were or she would have alerted police,” Patel said. His aunt, Charu Patel, does not speak English and was working at another hotel owned by the family on Wednesday morning.

Once Boyette and Rice were in the motel, they didn’t leave the room, but did ask someone to come and fix the remote control to their television.

“My wife went in and fixed the remote control,” he said. “We could have been the next random person they killed.”

“She was normal,” Merike said. “She didn’t act like she felt scared or upset.”

The Patels say there was no indication Rice may have been being held hostage by Boyette.

Tuesday morning, Rice came to the office and paid for another night, so room service was sent to refresh the room. The room next door, number 11, had reported a clogged sink. Pipes at the 30-room motel are connected so there was a chance the couple’s room, number 12, also was clogged, Patel said.

But Rice wouldn’t let a maintenance crew look, saying Boyette was in the bathroom.

Nothing aroused suspicion, however, until law enforcement started showing up around 2:30 p.m. Tuesday. By then, an anonymous caller had reported the whereabouts of the stolen Chevy Cobalt as being at the motel. Patel’s aunt and Merike identified Rice as one of the suspects wanted in what was by then a nationwide manhunt.

The Patel’s evacuated the south rooms of the motel and sent those guests to stay in other rooms or gather on the back deck as the standoff went on. The guests on the north side, where room 12 was located, couldn’t be evacuated safely and were told to shelter in place.

“The whole hotel was booked,” Patel said, although many guests were away at work at the time of the incident.

For three hours, the Patels watched the standoff as Rice and Boyette stood at their windows and taunted law enforcement. When the Georgia State Patrol showed up with an armored vehicle with a battering ram attached to the front, it was over.

“As soon as the lady saw the pole, she surrendered,” Patel said.

After Rice surrendered, Boyette is said to have shot himself.

The Patels didn’t hear the gunshot that claimed Boyette’s life but Patel says he knew it was over when law enforcement started moving slower in and out of the room. His body was removed at 2 a.m.; Patel replaced a broken lock on the door at 3 a.m. and the incident was over.

His dad has owned the motel since 1986 and Patel said the area is not crime-prone.

“I’m glad the killers are off the streets and our condolences go out to the victims’ families,” he said.