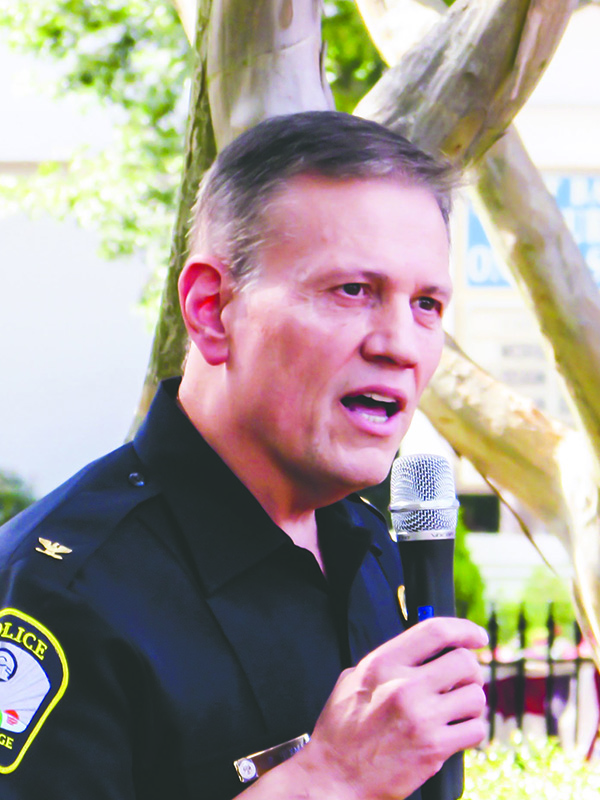 LaGRANGE – Drug problems and what to do about them was just one of the topics highlighted in Public Safety Chief Lou Dekmar’s annual report to LaGrange City Council on Tuesday.

The annual report covered everything from the department’s canine unit to community outreach to the effects of recent ordinances, but the effects of drugs on the community were of special concern to the council who asked for clarifications on several of the statistics presented.

“Marijuana, meth and cocaine tend to be the drugs that we’ve seen,” said Dekmar. “…Consistent with what we are seeing around the country is with prescription drugs, there is a lot of abuse. Around Georgia, one person dies a day from prescription overdoses.”

In LaGrange, offenses like forged prescriptions and forged licensing to distribute alcohol (ABC cards) made up the bulk of the special investigation unit arrests with 305 arrests last year. In comparison, there were 111 arrests for marijuana, 23 arrests for cocaine and 33 arrests for methamphetamines. The department seized $478,915 in illegal drugs last year as well as $59,518 in property and $31,509 in cash in cases involving illegal drugs.

“We rely heavily on crime analysis, and as a result, we have a lieutenant that is charged with coordinating our patrol resources in a way that addresses peaks in crime based on crime reports, calls for service and triggers that are identified,” said Dekmar. “There are a total of 569 targeted special operations that were conducted as a result of the criminal analyst (in 2016).”

The department also performs regular checks for businesses allowing underage buying and initiated 32 criminal cases to court last year as a result of those efforts.

The department also puts a heavy emphasis on community relationships and outreach as a means of prevention for both drugs and other issues.

“The police department continues to be involved with a number of non-profits or faith-based organizations that provide services to some of the least of our community members,” said Dekmar. “One of them being the homeless shelter.”

The department also works with the Troup County Mental Health Court, the Boys &Girls Club of West Georgia, Harmony House Domestic Violence Shelter and Camp Viola. Those are in addition to the department’s work with schools on Drug Abuse Resistance at LaGrange High School, Troup High School and Gardner Newman Middle School and Education and the Law Enforcement Against Drugs program at Berta Weathersbee Elementary School. Even with those programs in place, the department has continued to look for better ways to handle the challenges that come with serving the community.

“We started last year, we took a police officer position – because we are getting so many incidents where officers if they were going to be able to help this person were going to be tied up for a period of time, and we would have four, five calls holding – so we created a case worker position and transferred that officer into the community outreach.

“She works with those that have mental illness, medical needs, poverty, homelessness, a need for food, and she is able to spend the time necessary to hook these people up into those resources, thereby freeing the officer to go ahead and handle calls on his beat, but also doing something more long term, so that we are not getting repeating calls for service.”

The community outreach unit also conducted 120 visits within local schools, attended 57 neighborhood watch meetings and attended 378 events sponsored by local civic groups, businesses and faith based organizations. According to Dekmar, Neighborhood Watch programs and their efforts to help reduce and prevent crimes within the community are vital to increasing community safety, and while the 19 programs that are currently going in the city are a good start, he would like to see more community watch programs get started this year.

“They look out for each other (and) do those things that facilitate not only public safety, but good neighboring,” said Dekmar. “And we are in the process of identifying some other neighborhoods and seeing if they are inclined to organize.”