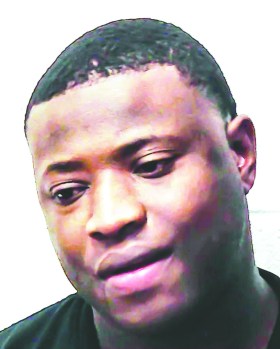 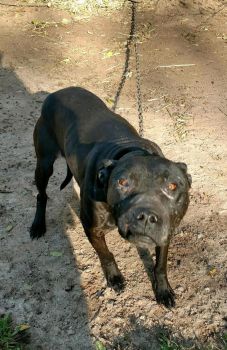 One of 12 dogs found at two homes just outside the Hogansville city limits. The Pit bull was part of an alleged dog fighting ring. The animal was missing a portion of its muzzle and had wounds associated with dog fighting. (Photo: Submitted) 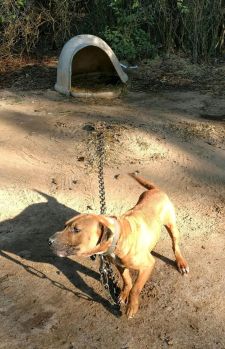 HOGANSVILLE –  The man suspected of running a dog fighting ring out of two homes in Troup County has been in trouble with law enforcement officials before – and charged with the same crime.

Travis Demetris Cameron, of Grantville, was arrested by the Meriwether County Sheriff’s Office on Jan. 19, 2014, according to the official booking document.

Cameron was charged with one count of dog fighting and one count of cruelty to animals, the Meriwether County Sheriff’s office stated in their report.

He bonded out of the jail two days later.

It was unclear as of press time on Friday night whether the case against Cameron proceeded through the Meriwether County Court system.

The man was still on the run from Troup County law enforcement officials as of Friday afternoon, stated Chief Lonza Edmondson with the Troup County Marshal’s Office.

Members of four different agencies descended on two homes just outside the Hogansville city limits on Tuesday after receiving an anonymous tip that Cameron owned a dog fighting ring.

When officials arrived at a house in the 100 block of Woodard Road they found two Pit bulls wandering in the street, a scale hanging from a shed, a bottle of medicine used to treat injured animals, a muzzle, syringe, syringe wrappers and black treadmill, according to the report.

Officers also discovered a ‘slat mill,’ similar to a tread mill, which is used to condition a dog for stamina and build up their leg strength, the report stated.

The second home was located in the 400 block of S. Lee Street.

Law enforcement officials and LaGrange – Troup County Animal Control officers discovered more dogs at that location –  hidden behind a pile of junk in the backyard, the report stated.

The animals all appeared to be emaciated, the report read. None of the dogs had any food; only a few had clean water.

Officers also found more medicine typically used to treat open wounds on an animal, a syringe, a needle, several pairs of pliers located inside a pen to secure chains around the dog’s necks, leashes, and what appeared to be a homemade ‘break stick,’ according to the report. Break sticks are allegedly used to pry open a Pit bull’s jaw after the dog bites down on an object, animal or human being, officers explained.

All the evidence and 12 Pit bulls were removed from both homes, said Chief Lonza Edmondson with the Troup County Marshal’s Office.

The dogs were taken to the LaGrange – Troup County Animal Shelter.

The animals were examined by a veterinarian whom found the dogs were starved, covered in burns and had wounds associated with dog fighting, according to the report.

One dog also had a broken nose; another Pit bull was missing a portion of its muzzle, officials said.

Members of the Troup County Sheriff Office, Troup County Marshal Office, LaGrange Animal Services and Pardons and Parole participated in seizing the dogs and the evidence from both homes.

Arrest warrants have been issued for Cameron, Edmondson stated.

Anyone with information on Travis Demetris Cameron’s whereabouts is asked to call the Troup County Sheriff’s Office at 706-883-1616 or Troup County Crime Stoppers at 706-812-1000. Callers may remain anonymous.