Local legislators HYPE-d to work together 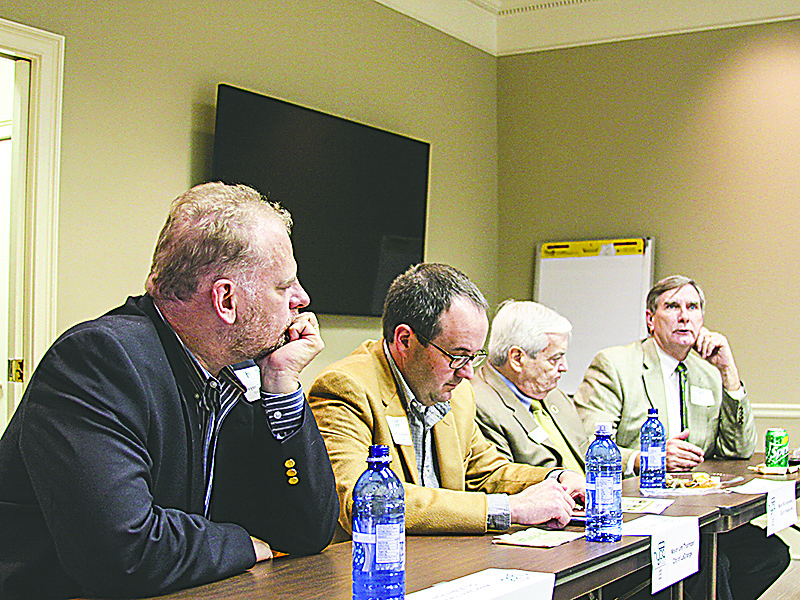 LaGRANGE – Local young professionals gathered at the LaGrange-Troup County Chamber of Commerce on Tuesday to hear about what is going on in the cities of LaGrange, West Point and Hogansville as well as the county, and the group came away with a picture of local officials united in the name of growth and community development within the region.

Mayors of the county’s three major cities and the county chairman addressed the HYPE young professionals group on Tuesday, and while their discussion of projects – past and present – was enlightening, one of the most notable facets of the presentation was their teamwork. Many local officials have noted the teamwork mindset of political groups within the county, but the ability of the group of local political leaders – who do still have to make controversial decisions like who pays for what – to be genuinely happy for the developments in neighboring cities is more often the exception than the rule with city and county political leaders in the state.

“I love LaGrange,” said LaGrange Mayor Jim Thornton. “I am passionate about LaGrange, but I realize when I say that, I’m also passionate about this entire region. Even though I have never lived anywhere other than LaGrange – and consider it my home – I do tell people that Hogansville is my ancestral home because my father and grandparents were Hogansville Greenwave graduates back when there was a Hogansville High School.

“Each of us plays an important part in a larger region, and I think it is a testimony to how far we’ve come that the three mayors and the county commissioner are kind of joined at the hip. We show up in all kinds of places, always together, and we get along really well, and we have a great relationship, and I think that benefits all of us whether that is someone living in Hogansville and working in West Point at Kia or vice versa.”

Thornton pointed out the Kia development in West Point as an example of progress that took place in one city but had positive effects throughout the county, and he pointed out the Great Wolf Lodge that is currently under construction as a future development that he hopes will bring positive change to all three cities and the county as well. Roughly $1 billion in corporate investments and approximately 2,500 new jobs were announced to be coming to LaGrange last year.

“Jim (Thornton) talking about the benefit of having Kia, and I’m thinking, we can’t wait for Great Wolf to get built because we are becoming a restaurant town in West Point,” said West Point Mayor Pro Tem Steve Tramell. “We are going to really hope that we can get a lot of people to come out of Great Wolf and just go down a few miles south and come have dinner with us in West Point, and whatever other activities we need. Come kayak the river.”

West Point has seen growth in recent years following the introduction of the Kia plant – which brought approximately 15,000 jobs to the area between the plant and its suppliers – and Point University to the city. This growth has had a positive effect on the region, but only a few short years ago, that success may not have been as celebrated throughout the county as it is today.

“It wasn’t always that way: When I moved here, I was shocked to discover that LaGrange wasn’t a foreign country because that’s the way people in Hogansville felt about LaGrange, and conversely that was how people in LaGrange felt about Hogansville,” said Hogansville Mayor Bill Stankiewicz. “And that was from the attitudes of political leadership, and a couple changes were made. Number one, Ricky Wolfe got elected to the county commission chair, and number two, Page Estes was hired as the president of the LaGrange Chamber (of Commerce), and there were others, but with their leadership, they began to see this region more cohesively and not as an enemy.

“… We began to think of ourselves as a region instead of an individual city. … We have intergovernmental agreements with LaGrange. We get our water from LaGrange, and we now attempt to solve problems regionally rather than locally, and that I think has been critical to some of the growth that has happened.”

Among the projects contributing to the spirit of teamwork between the governmental groups is the Troup County Center for Strategic Planning where they are able to discuss issues and look for solutions that will benefit the region together instead of giving into “institutional tension” between the cities and the county.

“We do work very closely, and in my opinion, (because) we work closely together there are good relationships between us,” said Troup County Commission Chairman Patrick Crews. “And there are times that there are issues that divide us a little bit, but at the end of the day we all work together, and we can spend our energy deciding what is best for our community. Because I have to look at what is best for Hogansville, West Point and LaGrange as a whole in the county.”

HYPE is a young professionals’ organization sponsored by the LaGrange-Troup County Chamber of Commerce that holds a variety of events throughout the year including a trip to the Columbus Cottonmouths game planned for March 10. Registration for the event can be found at http://business.lagrangechamber.com/events/details/hype-young-professionals-hockey-at-the-snake-pit-march-10-2017-2915

Man robbed at gun point while in car