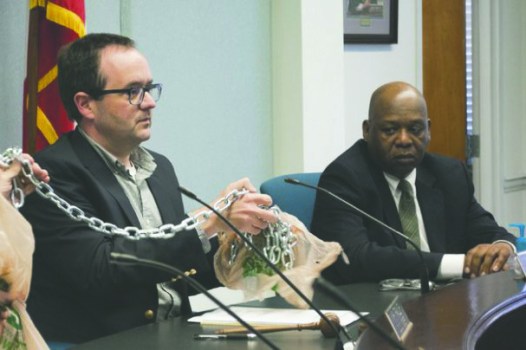 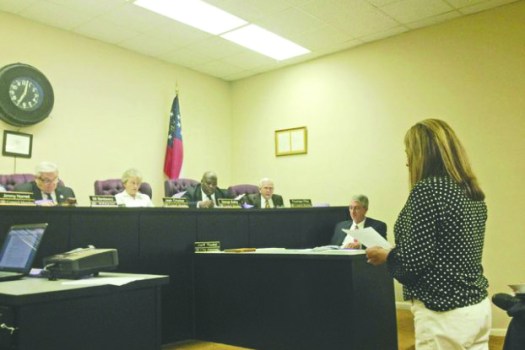 Bussey was not concerned about the possible size of the dog fighting network. He was more apprehensive about what other crimes might also be taking place inside the Hogansville houses.

Travis Demetris Cameron, of Grantville, was the alleged mastermind behind the dog fighting ring, according to the tip.

He was no stranger to the illegal activity. Cameron was arrested by the Meriwether County Sheriff’s Office in Jan. 2014 and charged with one count of dog fighting and one count of cruelty to animals, according to the official booking document.

He bonded out of jail two days later.

Bussey did not want to take any chances, given Cameron’s past. The animal services supervisor contacted the Troup County Deputy Marshal’s Office, the Troup County Sheriff’s Office and the state office of Pardons and Parole.

“We were going to raid both houses at the same time,” explained Bussey. “It was really an issue of officer safety.”

While law enforcement officers uncovered 12 pit bulls with wounds consistent with dog fighting and plenty of evidence to support the crime, they did not find Cameron. He was still on the run as of Wednesday afternoon.

Deputy Marshal Lisa Lindsey said typically the organizers facilitating the dog fighting ring are not doing it just for sport.

“There’s usually drugs involved, a lot of money, guns and other crimes also taking place,” she stated. “… But they’re also doing it for the money and the pleasure of seeing animals suffer.”

Dog fighting has now become an underground, criminal network. Organizers may also breed their ‘prize fighting dogs’ and sell them on the black market.

“Those who run them (dog fighting rings) can get thousands of dollars for selling the puppy of a ‘champion’ dog,” Bussey said.

Criminals may just steal unattended dogs from other people’s yards – or worse.

“The dogs don’t get a choice to fight, they’re made to fight,” explained Evie Kettler. “Then you have bait dogs. People give puppies away for free on eBay or on Facebook. Dog fighters buy them up and use them as bait dogs. They shave their (dogs) teeth down. We beg people not to give their dogs away for free or leave your dog unattended in the back yard. They’ll (criminals) steal them and use them for bait dogs.”

Kettler has become a champion for animal rights – though it is a role and responsibility she never planned to take on.

The local dog advocate is probably best known for proposing the current “Tethering of Dogs” ordinance that’s now law within the city limits of LaGrange. The measure prohibits dog owners from chaining (tethering) their animal to a cable or chain and affixing that line to a single point, such as a tree or a stake in the ground.

Instead animal owners can use a fenced in area, including a pen that is properly sized for their pet, or a trolley system that allows the animal to run between two fixed points and must be at least 10 feet long.

Kettler was not satisfied with the ordinance – and believes more should be done to protect dogs.

The outspoken crusader took her cause to other towns, including Hogansville.

Kettler is a member of several animal advocate groups on Facebook such as the League of Humane Voters Georgia, Paws Across America and the Atlanta Humane Society. The organizations lobby for better legislation concerning animal rights.

“We try to educate people and tell them to get to know their local legislators. Let them know how you feel and your concerns … it’s so important,” Kettler stated. “Why don’t our local leaders and representatives change these (animal rights) laws? They’re the ones who can do it. I get a lot of excuses … and then I see the horrific acts that happen (to animals) and I wonder why we don’t protect them? It’s very sad. What’s going on in Troup County and LaGrange is sad.”

Troup County does not have an anti-tethering ordinance in place for dogs, Kettler added. But the city of West Point does have a ban on tethering animals, she said.

Meanwhile, the animal rights advocate continues to be inundated with messages on social media and phone calls about illegally tethered dogs, animal abuse and neglect at homes throughout Troup County.

“People always ask me, ‘Why do I do what I do?’ I wonder why they have to ask me,” she stated. “All I’m trying to do is help the people who call me crying about a situation –  and the dog. But what do you do when you get no support? It hurts, but you keep pushing on. I’ve had nights where I get no sleep. It’s very stressful.”

Kettler recently started her own animal rights organization on Facebook called ‘Paws 4 Chainge.’ The non-profit group is raising awareness about dogs being tied up outside with chains, she said.

‘Paws 4 Chainge’ also plans to build fences for homeowners who want to keep their pet outdoors but cannot afford to construct an enclosure.

Chief Deputy Lonza Edmondson with the Troup County Marshal’s Office believes more animal advocates like Kettler are needed in the community. But he also understands why people may not tip off local law enforcement agencies, particularly when it comes to dog fighting.

“They fear the retaliation,” Edmondson explained. “Along with dog fighting comes other crimes, drugs and guns … But you can remain anonymous. If a person calls with information leading to an arrest and conviction of a dog fighter, they can receive a reward of up to $5,000.”

The person who turned in Cameron’s dog fighting ring is eligible for the award money, said Deputy Marshal Lindsey.

“All the dogs are putting on weight. They’re happy and they’re healthy,” said Bussey.

The Pit bulls will remain there at least until Cameron is behind bars. The dogs are being housed as evidence in the case against him.

This is based on a person being convicted for a second time under the same charges.

The sentence for a first-time offender convicted of dog fighting and aggravated animals cruelty is 1 – 5 years behind bars for each count, according to the D.A.’s office. A person can also be fined $5,000 or more for dog fighting.

Anyone with information on Travis Demetris Cameron’s whereabouts is asked to call the Troup County Sheriff’s Office at 706-883-1616 or Troup County Crime Stoppers at 706-812-1000. Callers may remain anonymous.

Anyone wishing to report animal abuse, neglect or dog fighting can contact the LaGrange – Troup County Animal Control at 706-298-3606 or the Troup County Marshal’s Office at 706-883-1627.