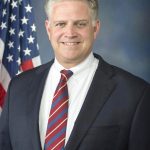 President Donald Trump delivered his first joint address to Congress on Tuesday and Georgia’s freshman representative was front and center.

“He made a genuine gesture right off the bat, talking about Black History Month and the work that’s been done, as well as the work that still needs to be done,” said U.S. Rep. Drew Ferguson, R-West Point.”

Ferguson also was impressed with the close of the speech.

“He’s really asking the country to come together and dream big,” he said.

Trump’s speech hit on many issues he’d called for in his campaign, from immigration reform to crime to repealing and replacing Obamacare. A section of the speech was focused on crime and crime prevention and getting Americans off drugs.

“You can tell that was real emotion,” Ferguson said. “That was personal and real for him.”

Ferguson also was pleased to hear Trump mention fair trade, tax reform and an end to overregulation, issues he’s campaigned on himself.

“He wants to get the American economy going again,” he said.

“President Trump has hit the ground running and is keeping his promises to the American people. He has put the needs of Americans first and the results he’s already achieved have brought forward a renewed spirit of optimism in our country. It’s been encouraging to see President Trump start to get our government moving at more of a business-pace, rather than the usual Washington pace,” Perdue, a Republican, said.

“Look at the results. The economy today is on the precipice of a turnaround,” ge said. “The bond market is pricing in potential growth, consumer confidence is showing early signs of moving up, and even corporate leaders are beginning to talk about investing again after a decade of uncertainty and low growth.”

“As the chairman of the Senate Veterans’ Affairs Committee, I’m especially grateful for President Trump’s continued commitment to fixing the Department of Veterans Affairs and making sure our veterans get the care and benefits they have earned,” he said. “I hope the president will join the Senate and House committees in our efforts to enhance veterans’ choice, expand access to health care, increase accountability at the department and improve the appeals process so that veterans get timely responses. The president’s personal interest and leadership in this area will be a vital asset as we work with the new Veterans Affairs secretary, Dr. David Shulkin, to bring about the change our veterans need.”