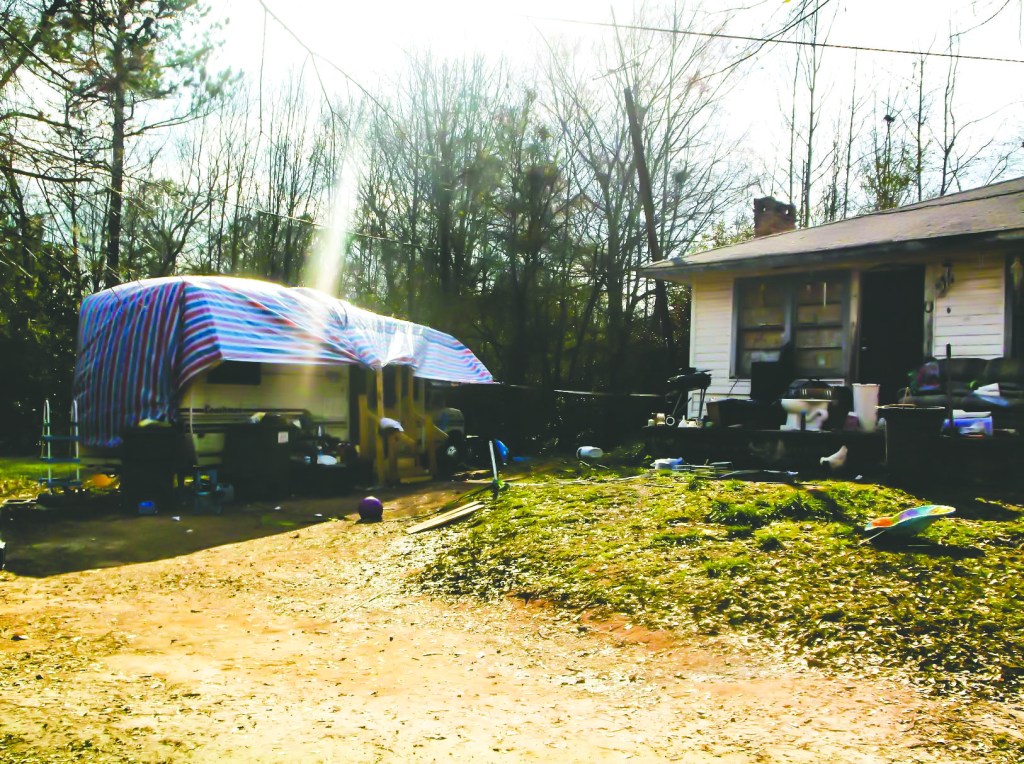 Law enforcement officials with the Hogansville Police Department, along with five other local agencies, found two young children living in deplorable conditions in a camper behind a home in the 4700 block of Hogansville-Mountville Road. HPD Chief Brian Harr said both the camper and the home was filled with trash and feces. Officials also seized 31 animals from the property. (Photo by: Submitted)

HOGANSVILLE –  A seven-month-old infant and a two-year-old child are now in the custody of the Department of Family and Child Services after law enforcement officers found them living inside a camper filled with junk, trash and feces Monday afternoon.

The Hogansville Police Department, along with Hogansville Animal Control responded to a home in the 4700 block of Mountville – Hogansville Road after receiving an anonymous tip the residence was unsafe and there were several animals on the property, said Chief Brian Harr.

While at the house, officials with LaGrange – Troup County Animal Control and the Troup County Marshal’s Office, who were called in as back up, discovered a camper in the backyard surrounded by flies, the police report stated.

Officials looked inside the camper and found a young child watching TV and an infant asleep in a back bedroom. The room was attached to a bathroom where four other residents were allegedly using a five-gallon bucket as a toilet, the report said.

Officials and HPD investigators stated the smell of feces inside the camper was so powerful, some of the officers became sick to their stomachs.

The main home on the property was not any better, officials stated.

“Conditions inside the residence were described as ‘deplorable’ and completely unsafe for habitation,” said Harr.

All personnel wore air tanks and protective clothing when they entered the house.

Harr stated the water to the home had been turned off at the residents request due to a possible water leak.

Law enforcement officials discovered the inside of the house was overrun with trash, cob webs, rotting food, empty liquor and beer bottles plus animal and human feces and waste, the police report stated.

Officers stated the trash was up to their shins in some places, according to the report. They also found mattresses covered in animal feces.

Five dogs and eight cats were found freely roaming around the home, along with a rabbit, hamsters and turtles, the report stated. Most of the caged animals did not have food or water, officials said.

Animal Control officers and Marshal’s Deputies removed a total of eight cats, five dogs, four turtles, two hamsters, a rabbit, a pot-bellied pig and seven chickens, according to the report.

Those animals were all taken to the LaGrange-Troup County Animal Control facility to be checked out by a veterinarian and given food and water.

Three other animals were not accounted for.

Chief Harr said investigators are still trying to determine what charges, if any, will be filed against the four adults.

The City of Hogansville Public Works and the Troup County Fire Department also assisted in the incident.