Mayor Thornton will run for re-election 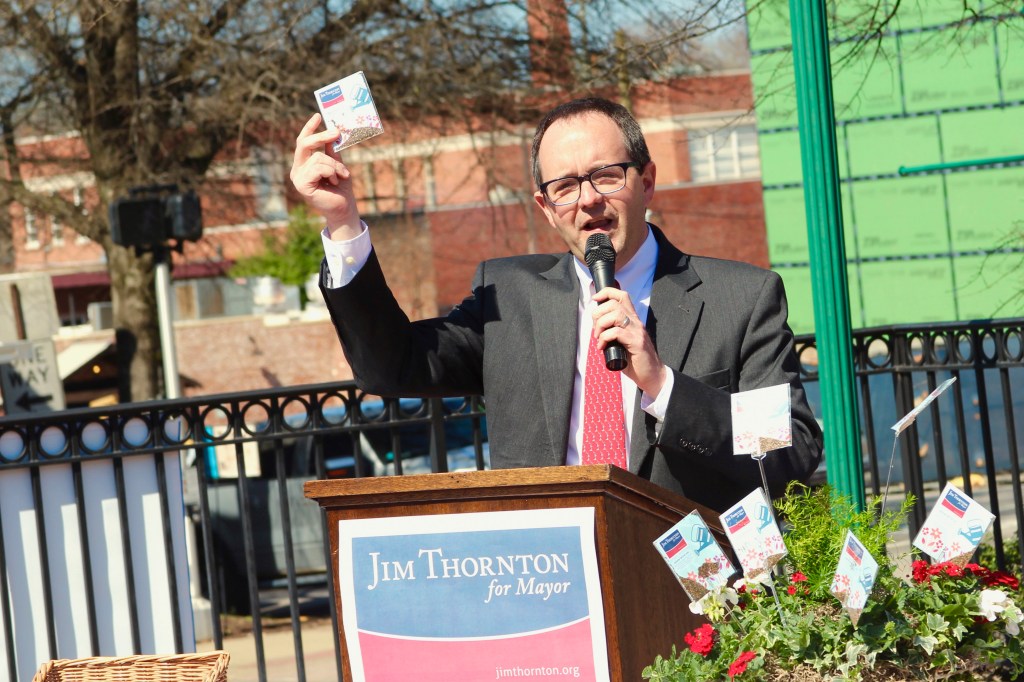 Mayor Jim Thornton announced his intent to run for his second mayoral term on Thursday in a press conference on LaFayette Plaza. (Submitted)

LaGRANGE – The plaza in front of the LaGrange-Troup County Chamber of Commerce was buzzing with excitement on Thursday, as Mayor Jim Thornton used the city’s backdrop to announce his plans to run for mayor again in November.

Thornton’s decision came as supporters waited with bated breath to hear whether he would instead choose to run for the Georgia State Senate, but ultimately, he felt that his love and loyalty for LaGrange won out, he said.

Thornton expressed hopes that LaGrange’s residents would consider the work that he has done for the city as mayor – and prior to that as a city council member – when choosing who to vote for in November, and there was no doubt among council members present that he has influenced the council during his years of service.

It isn’t just city officials who are excited about Thornton running for another term as mayor though. The plaza held a good sized crowd of supporters even for an announcement that took place during the middle of the day on a weekday, and county officials were likewise interested to hear Thornton’s future plans.

“I think this is wonderful news for LaGrange and Troup County because Jim (Thornton) has certainly been a good leader for the city, and what is good for the city is also good for Troup County,” said County Commission Chairman Patrick Crews. “… This is exciting. I know he could have looked at going to Atlanta, but I think his heart truly is in this community and wanting to see all the things that are out there and the future growth. He’s excited about that.”

When he first ran for mayor four years ago, Thornton ran on a platform of improved city finances, industry and business recruitment, support of public safety with an emphasis on prevention, more open government and improved quality of life. He feels that he has had some success in all these areas in his time as mayor, and expects that growth to continue in the next three to five years.

“I think we have shown a record of achievement,” said Thornton. “The city continues to operate with a balanced budget with no property tax, very limited long-term debt and a large cash reserve. We have seen numerous industrial expansions. Duracell and Jindal are currently undergoing major expansions. We have new retail projects, especially focused around the LaGrange Mall. Construction has begun at (I-85) Exit 13 of the Great Wolf Lodge resort, which is an amazing project in terms of the scope of what it is going to do for the south side of the city. We have announced Sentury Tire, which we are about to break ground on a new high tech tire factory. And just behind me… we have this Courtyard by Marriott hotel and a parking deck right behind it. It is an amazing project that is transforming downtown LaGrange.

“We focused on improving our infrastructure around town with road projects such as the Bull Street realignment, the Vernon Road connector, the Tom Hall Parkway, the Broad Street roundabout, and we continue to work tirelessly with the Georgia (Department of Transportation) on the Hamilton Road widening – which we anticipate any day now they’ll start acquiring right of way. We keep focusing on that. We know how important the Greenville Street bridge is to the community, and believe me, we focus on that.”

Thornton also pointed out the nine new officer positions added to the LaGrange Police Department during his time as mayor. He further emphasized his accessibility both on Facebook and other official channels as well as the increased abilities for anyone to watch the city council meetings on LGTV and the council’s open mic policy that he has encouraged through the years. Part of his goal for a second term as mayor would be to build upon those successes.

Thornton is a LaGrange native who was born and raised in the city and has practiced law in town for the past 20 years. His full speech is available to watch on his Facebook account.

Three city council positions will also be up for election on this November’s ballot alongside the SPLOST vote.