Rookie school ‘heats up’ for recruits 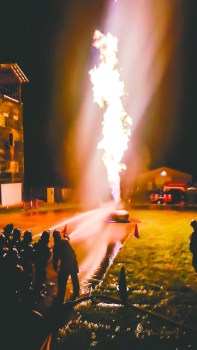 Rookies with the LaGrange Fire Department face the daunting task of putting out flames exploding from a pressurized container filled with liquid petroleum. The exercise was one of many during the department’s live fire training Thursday night. (Photo by: Melanie Ruberti | Daily News) 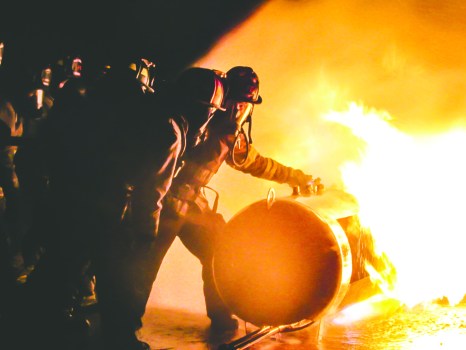 A rookie firefighter reaches through the flames and intense heat to shut off the valve on a pressurized tank containing liquid petroleum. The exercise was part of the LaGrange Fire Department’s live fire training. (Photo by: Melanie Ruberti | Daily News) 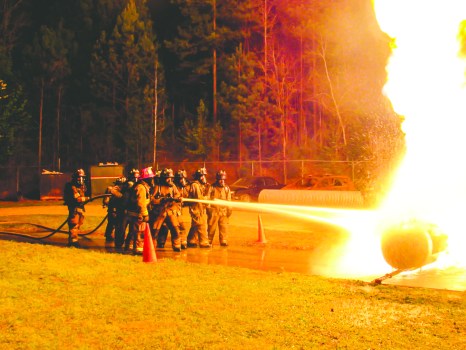 Rookies work together as a team to stay in line and attack the pressurized container fire with two water streams from in order to reduce the flames and safely reach the shut off valve. (Photo by: Melanie Ruberti | Daily News) 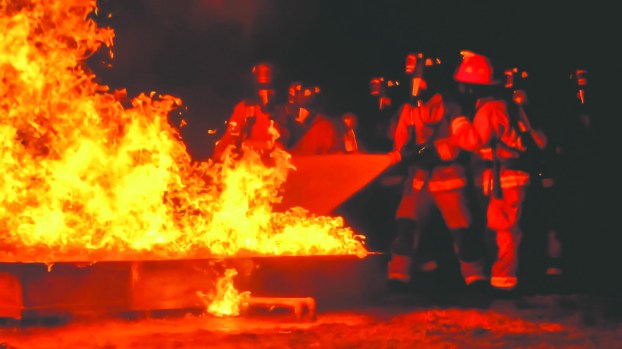 An instructor with the LaGrange Fire Department shows one of the rookie firefighters how to adapt his water stream to push flames from a simulated liquid spill away from the group. (Photo by: Melanie Ruberti | Daily News) 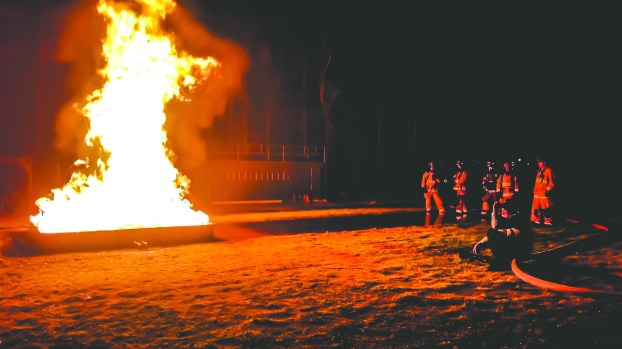 A pressurized tank containing liquid petroleum was on fire and it was the firefighter’s duty to cool the container and shut off the gas valve – or face intense heat and flames from another explosion.

The six-man crew battled the blaze using the skills and knowledge they learned in the LaGrange Fire Department’s annual rookie school. The rookies wrapped up their fourth week of training with live fire exercises.

“It’s intense and really fast paced,” said LaGrange firefighter Rich Mounts. “Everything from the search and rescue exercises to the live fire attacks.”

“This is the most elaborate exercise we’ve done so far in the school,” stated LaGrange firefighter Joseph Livingston. “There’s a lot of moving parts.”

The rookies rotated through a variety of positions: attacking the blaze on the hose lines from the right, middle and left, plus being the lead firefighter to reach into the fire and turn off the container valve.

“We had to work as a team, as a unit and control the hoses,” Livingston explained. “If you were the ‘lead man,’ you had to stand between the two attack lines and make sure they were in line with each other … communication was key.”

LFD instructors stood alongside the crew to make sure firefighters were performing each task correctly. The rookies will have to receive state certification in pressurized container fire control, stated LFD officials.

The six-man team faced a simulated flammable liquid spill, search and rescue of potential victims from a burning building using just their hands and eyes; then with thermal imaging equipment. Rookies also doused out burning cars and dumpster fires.

“We’re asking them to put themselves in unpredictable situations,” explained Lt. Rob Vael, head of LFD’s training division. “We try to put them in the safest positions, but we need to know they have the physical and mental skillset to get the job done … During their training, we show them the rudimentary form of firefighting because even technology can fail or malfunction.

“A lot of this (exercises) is making sure what to do right – and what they (rookies) are doing wrong,” Vael added.

“You may run the same call one hundred times, but nothing about your response to the call will be the same,” stated Mounts.

The rookies worked through Thursday night and well into Friday morning.

While it was a grueling 24 hours for the six rookie firefighters, many said the hands on training only solidified their decision to join the fire service.

“… It’s the best job in the world,” said Livingston. “I wouldn’t do anything else. To see people smile when you help them is the best feeling in the world.”

The rookies will take their final exams in May.