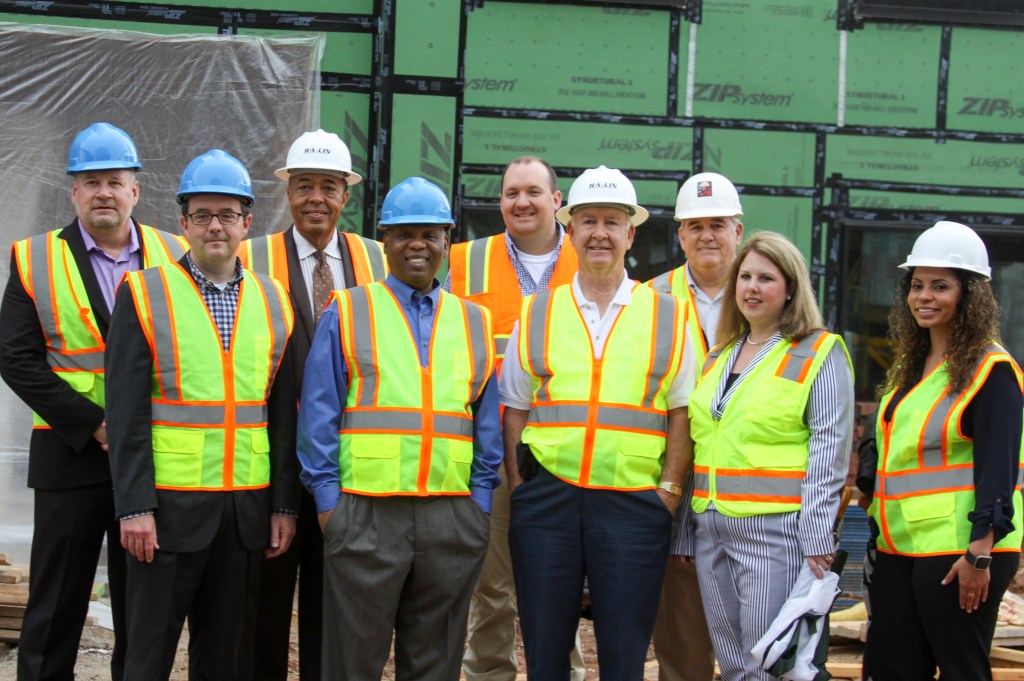 LaGRANGE – Bricks were stacked at the ready and craftsmen were busy applying exterior coatings as an unlikely looking group wearing suits and hard hats walked past the dust fences on Tuesday.

The city council got the chance to see the progress of the Courtyard by Marriott that is currently under construction in downtown on Tuesday prior to the council’s regular work session. The 90-room hotel is seeing solid progress on both its interior and exterior construction, and the project team from Ra-Lin hopes that the construction will remain on schedule for an opening this fall.

“You can see the edifices on half the front of the building right now – or stucco – those are the colors that it will be for the trim and base color,” said Project Manager Adam Marona. “… I believe middle of April the exterior of the building should pretty well be there as far as brick and edifices go.”

The project is currently ahead of schedule, but factors such as weather could affect the hotel’s actual completion date making all dates tentative.

Bobby Carmichael, the executive director of the Downtown LaGrange Development Authority, reports that there have already been requests to reserve rooms in the hotel during upcoming events, which seems to indicate a positive future for the hotel which is not slated to be complete until sometime this fall.

Along with a tour of the hotel, council members had the chance to ask questions regarding the parking deck that is also being constructed by Ra-Lin. Some locals and council members were surprised to see the large pre-fabricated pieces of the deck coming in and the quick, smooth progress on the deck because of those pieces. According to Marona, that style of deck construction has become the norm in recent years.

“Most of the (decks) that I’ve seen, this is how they’re done,” said Marona. “Every one you see in downtown Atlanta. … And your other one here in town is (constructed like that).”

According to Marona, the deck should be assembled in four to five weeks, and after the assembly, finishing touches like paint, light fixtures, fire lines and paving in the entry will need to be completed before the deck is ready for public use. However due to the fact that the hotel will continue to receive deliveries for months following the deck’s completion, the city and Ra-Lin will have to take a close look at the safety of motorists entering and exiting the deck while the hotel’s construction is still in progress.

“It may be that we block off our middle road and use the Vernon (Road) side (for deliveries) to let everyone come into the deck from Broad (Street) and maybe cut it off at the entrance to the deck, but I think there are ways that we can work something out,” said Marona. “… I know that would relieve a lot of stress around here and help us too.”

Ra-Lin expects to coordinate with city staff and other groups to determine when the deck can be safely opened, but no date could be determined at this time.