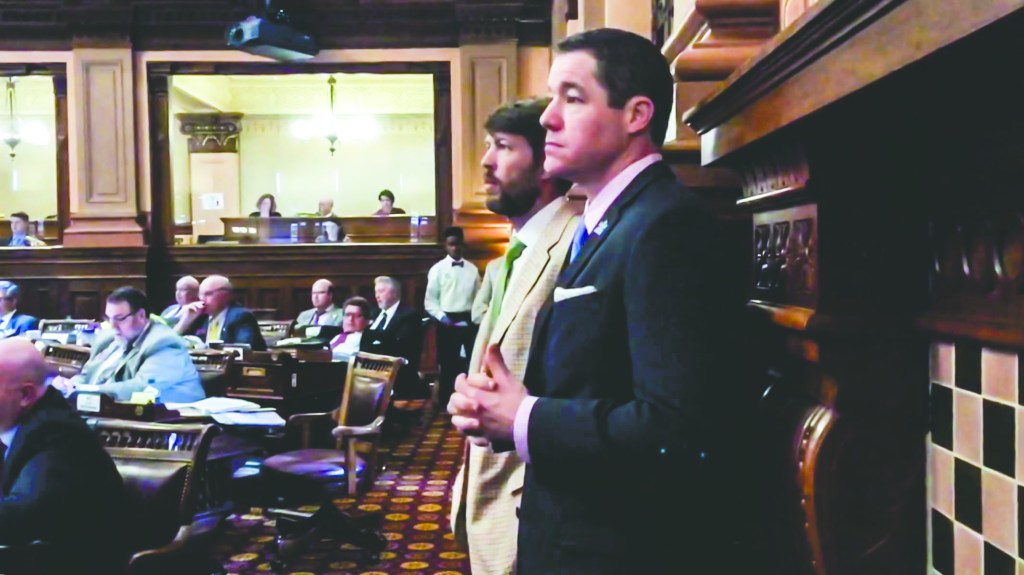 Dale Jackson nervously waits as legislators in the House vote on SB 16. The proposal passed the chamber and is set to be voted on by the state Senate on Thursday. (Photo: Submitted)

ATLANTA – A proposal to legally add six more disorders to the state’s medical marijuana registry passed the House by an overwhelming margin during Tuesday’s legislative session.

The measure now heads to the Senate for a vote.

While local dad and SB 16 lobbyist, Dale Jackson, was happy with Tuesday’s vote.

“I am extremely excited that the House has finally voted on and approved the new and improved SB16,” he said from the State Capitol on Tuesday. “I’m certainly looking forward to the Senate voting on this important legislation that gives thousands of Autism families the ability to try this medication. I am definitely more optimistic this year than in the past but we have been here before and I’m concerned that our bill could get lost in the works when it comes to day 40 at the Capitol…”

Jackson was on the Senate floor during Sine Die – or last day – of the general assembly in 2016. The proposal came up for a vote with just 10 minutes left on the legislative clock. The language in the measure had been altered and was voted down at the last minute.

Jackson’s motivation for passing SB 16 is his son Colin, 8. The little boy has a severe form of Autism that left him unable to perform basic functions like going to the bathroom by himself or tying his shoes.

Colin started taking cannabis oil a year ago. Jackson and his wife, Sarah, have seen vast improvements in their son within those 365 days. Recently, the 8-year-old said his first word. He can also feed himself, make eye contact, has regular sleeping habits and more.

If SB 16 passes the Senate, Colin will be able to continue his daily regimen of medicinal marijuana.

Under SB 16, doctor’s must also report to the state the strength and dosage of cannabis oil their patients are taking to treat their illnesses.

SB 16 will keep the THC levels in the cannabis oil at 5 percent.

The measure also includes a “reciprocity agreement” which allows people with medical marijuana cards from other states to continue taking the oil while in Georgia as long as they follow state guidelines. But there is a time limit for visitors. After 45 days, patients must either return home or apply for a medical marijuana card in Georgia.

“… The difference this year is that we have the public support of Sen. Matt Brass (R-Newnan), Sen. Greg Kirk (R-Americus), Author Sen. Ben Watson (R-Savannah) and Lt Gov. Casey Cagle. Their work with Rep. Allen Peake (R-Macon) has been instrumental in moving this bill forward. I am overwhelmed with emotions as I watch the process.”

Jackson plans to be standing on the Senate floor next to Lt. Gov. Casey Cagle when legislators vote on SB 16 this Thursday.