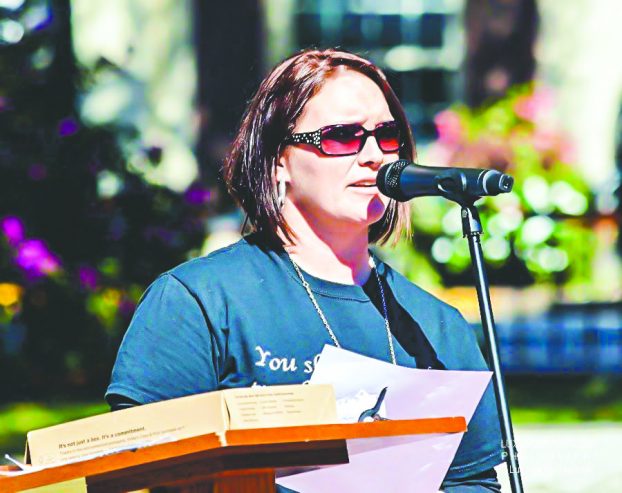 Kelly Camp shares her testimony of overcoming an addiction to drugs during a Break Every Chain rally. (Photo: File)

LaGRANGE –  When Kelly Camp hosted the first “Break Every Chain” event on November 14, 2015 in LaFayette Square, she had no idea how popular the gathering would become in the community.

Almost two years later, Camp will hold the fourth Break Every Chain revival at the end of April in downtown LaGrange.

“I didn’t expect it. I thought it would be a one-time thing,” she said with a laugh. “But I’m stuck on it now, and I love it … I noticed there were more people at that last event (in October) then the first two.”

Break Every Chain invites former addicts to share their stories of substance abuse and survival. The testimonies are meant to encourage people who are also on the road to recovery – and for those trying to take that first step to become clean and sober.

Addiction is a battle Camp fought against for many years. She started abusing opiates when she was 17 years old.

In November 2015, Camp had only been sober six months and recently finished a stint in the Troup County Jail.

But during her time behind bars, Camp gave her life to Christ. In return, God gave her a very clear mission: help other addicts in the community.

Less than two months later, Camp held the first Break Every Chain event in the square. The gathering has grown in ways she never imagined.

“The message we have continued to get across is God’s love and grace for you, no matter what you are bound up in… It’s not just substance abuse, but any addictions: pornography, financial spending, stealing … anything,” she explained. “We want people to know God loves you just the way you are. You are big enough and strong enough to overcome your addiction. You don’t have to stay in bondage.”

Not only is the event growing, but so is the number of people willing to share their testimonies in front of a crowd in LaFayette Square.

“You can see a change once they start to talk about their addiction out loud,” Camp said. “I have seen more people get involved in the event –  and stay involved because it helps them with their own recovery … I’ve also seen a lot of people give their life to Christ as well.”

Prayer tents are set up around the square during the event for folks who need to talk with someone or get information on recovery resources available in the area.

Troup County Sheriff James Woodruff is the guest speaker for the upcoming Break Every Chain event. Local bands, singers and dancers will also perform. A free lunch will be provided and t-shirts for the first 200 people who gather on the square.

This year, Camp is teaming up with Michael Moat who is leading the “Stepping in Faith Freedom March.” Both events are taking place on Saturday, April 29.

The march will begin at LaGrange High School at 10:30 a.m. and end at LaFayette Square.

The Break Every Chain event will start at 11:30 a.m. in the square.

Anyone wanting more information on Break Every Chain can visit their Facebook page at www.facebook.com/breakevery.chain.184.