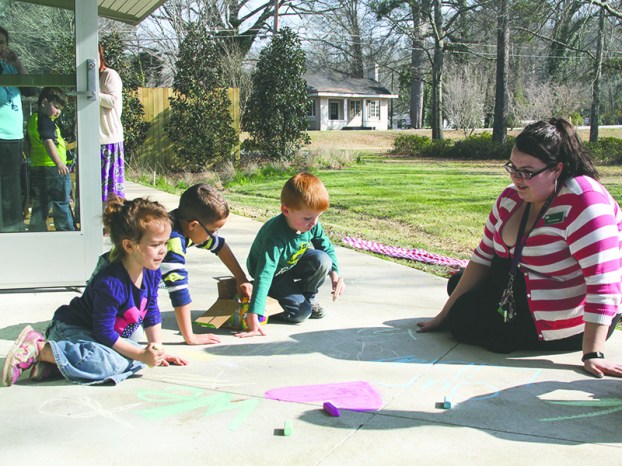 Children color with sidewalk chalk at an event hosted by the Hogansville Library. The library may be forced to cut back on hours if it cannot find funding to cover utilities on the new Hogansville building. (File Photo)

Library asks for money to keep lights on

LaGRANGE – Sometimes even blessings are mixed. Troup County’s libraries are coming to find the truth in that fact as a much needed increase in the size of Hogansville’s library has created a budget concern since the size of the library’s budget did not increase with the building.

Representatives from the local libraries went before the Troup County Board of Commissioners on Tuesday to request help fund the difference in costs of running the new Hogansville Library, which is significantly larger than the previous Hogansville Library and thus more costly to run.

“The biggest issue that we have in terms of funding is the new library,” said Director Keith Schuermann. “We accelerated the library from a 3,000 square foot building to 11,000 square foot building – a nearly 400 percent increase in square footage… You can imagine by increasing by four times the expense incurred in operation. Our utilities for example have gone up 100 percent. The building and maintenance costs with expanded HVAC (heating and air) systems is a situation where we cannot afford to run the new library on our old budget framework.”

The LaGrange Library’s older systems also raised concerns for the library representatives due to concerns that the heating and air systems may need repairs as they age.

According to Schuermann, if the libraries do not get more funding, they may be forced to cut hours in order to make up for the difference in their budget. The Troup-Harris Library system requested $32,000 in all.

County officials offered to speak with the Hogansville Library’s utility provider to get the library an improved rate.

The county received almost half a million dollars in funding requests on Tuesday and only has $50,000 not allocated to a budget, so the library will face stiff competition for the funds, and may be forced to rely on the generosity of its patrons now more than ever.