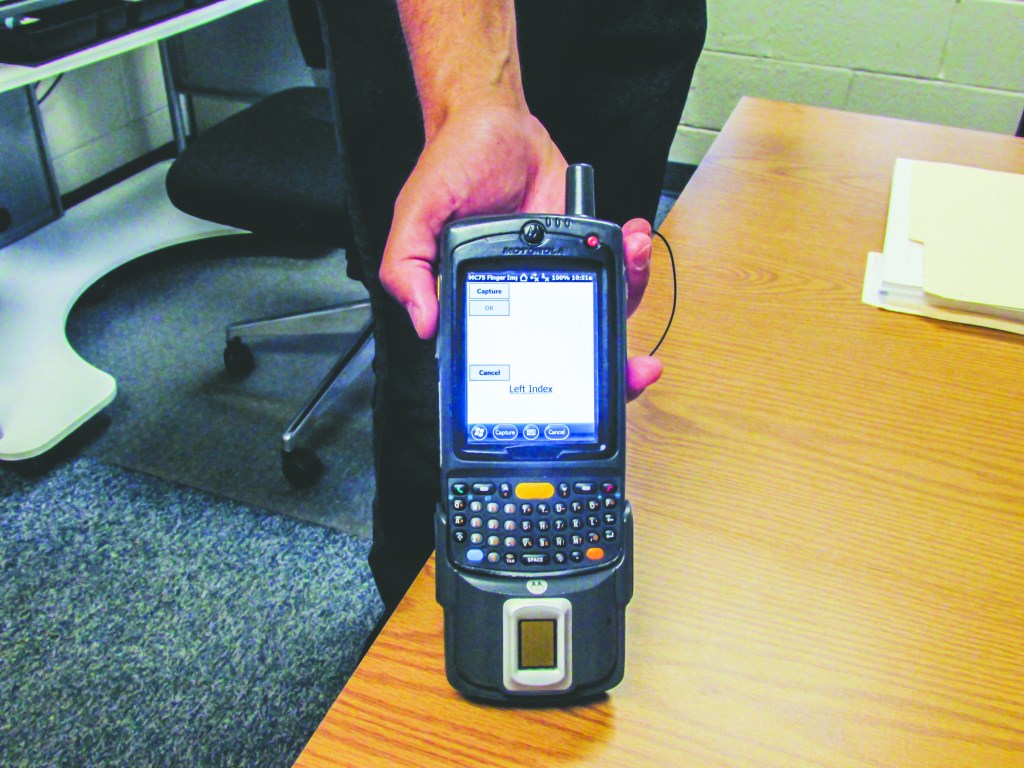 LaGrange Police Sgt. Jeremy Butler shows off the Rapid I.D. device utilized by officers in the department. The mobile tool helps police verify identification of individuals who may be lying or are deceased. (Photo by: Melanie Ruberti | Daily News)

People may not tell the truth, but fingerprints don’t lie – especially when they are run through the Rapid I.D.

The mobile, hand-held device helps law enforcement officers retrieve a person’s correct name. The user friendly tool also displays a photo for officers to view in comparison with the individual in question.

“We’ve had a lot of success with it,” Butler said. “Sometimes we identify two or three people with Rapid I.D. who are not being truthful with us in one week.”

The device has been helpful for officers responding to a call about a “suspicious person” and while conducting traffic stops.

“The driver may say he doesn’t have his driver’s license on him and will give me a false name and date of birth … a lot of times people will use the names of family members,” explained Butler. “… if I run the name and date of birth through the computer in my car and nothing shows up, I can use their fingerprint on Rapid I.D. to give me their correct identity.

“Usually folks that give us false information think they are wanted by police or have active warrants – and sometimes they do,” Butler added.

The Rapid I.D. looks similar to a portable radio or bulky cellphone. The individual in question places their fingers, one at a time, over a small scanner.

Once officers obtain an individual’s fingerprint, the information is uploaded into the Georgia Criminal Information Center, or GCIC.

The database houses the criminal history of every offender within the state and tracks their process through the justice system, according to the GCIC website. The information includes whether a person is wanted by law enforcement or if they are on probation or parole.

Officers can arrest an individual for giving a fake identity and charge them with obstruction.

“Ultimately, people are going to lie if they think they have something to hide,” Butler said. “We tell them to be honest … sometimes we just cut them loose. Our goal is not to arrest everyone who does that (gives false identifications).”

The device also comes in handy for detectives trying to identify someone who is deceased, but has no I.D. on their person, Butler added.

Rapid I.D. cannot be used in every situation. Officers must have reasonable suspicion an individual is not telling the truth – and get consent before scanning their fingerprints.

Still, the device is just one more tool in the officers’ arsenal that assists them in keeping the community safe.