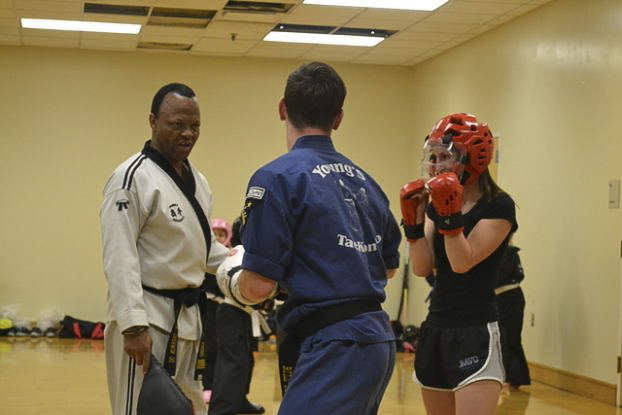 Toby Young instructs students during one of his classes at the Mike Daniel Recreation Center. Young pleaded guilty on Monday to child molestation in a Troup County Superior Courtroom. (Photo: File)

Toby Young sentenced to prison; had prior conviction

Robert “Toby” Young, 59, was accused of four counts of child molestation, sodomy and enticing a minor for indecent purposes.

Young, owner of Young’s Tae-Kwan-Do Academy, was arrested in August of 2016.

One of his students told investigators with the LaGrange Police Department that Young inappropriately touched her inside his home earlier that day in the 700 block of Bridgewood Drive.

The girl, under the age of 16, said the incident happened just three hours before it was reported, according to LaGrange police investigators.

In a non-negotiated plea with the Troup County District Attorney’s office, Young pleaded guilty to the four counts of child molestation.

The D.A.’s office dropped the charges of sodomy and enticing a minor because the victim, a former student of Young, did not want to testify.

Instead, Assistant District Attorney Drew Case brought in another one of Young’s former students. The woman took karate lessons from Young almost 20 years ago.

She testified she was 12 years old when Young inappropriately touched her. The woman said she was too scared to tell anyone about the incident.

It was not until Young was arrested in 2016, did she realize her former teacher was still molesting his students.

Case explained how Young gained the trust of his victims.

“He would convince them they were his best student. He would then gain the parent’s trust and get the victims alone,” Case said. “He would inappropriately touch them and expose himself.”

But Young had rows full of his supporters in the courtroom.

His defense attorney, Jackie Patterson, brought some of them up to testify on behalf of his client.

Two karate students and five parents expressed their disbelief of the charges against Young.

“We loved and trusted him,” one parent stated.

Young also addressed the court. He cried as he expressed his remorse to presiding Superior Court Judge Emory Palmer.

Although Young’s guilty plea was non-negotiated, the State did agree to place a cap on the number of years the former karate teacher could serve behind bars.

But Young also entered a blind plea. Although Case and Patterson made their own recommendations, ultimately Judge Palmer decided Young’s sentence.

Case also told the court Young was arrested in 1995 and charged with contributing to delinquency of minor.

Young, 27 years old at the time, reportedly had sex with a 16-year-old, Case stated.  The charge was a misdemeanor in those days, the prosecutor explained.

Young served 12 months on probation as a result of that charge.

Patterson reminded the judge Young had no prior felonies and recommended his client be sentenced to five years to serve 12 months in prison.

But Judge Palmer took the charges against the former karate teacher seriously and sentenced Young to 20 years to serve 12 years in prison for each count against him.

If Young serves his full sentence, he will be 81 years old when he is released from prison.