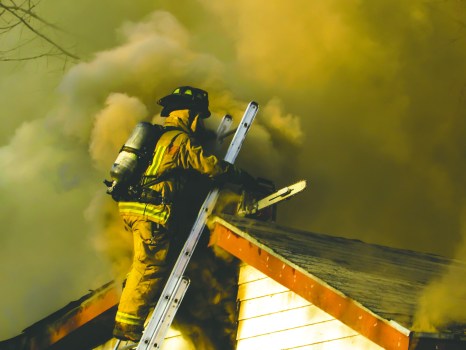 A LaGrange firefighter prepares to ventilate the roof of a home on fire. The fire department’s response time, methods of attack and number of firefighters at a fire scene are just some of the details evaluators look at during the accreditation process. (Photo by: Melanie Ruberti | Daily News) 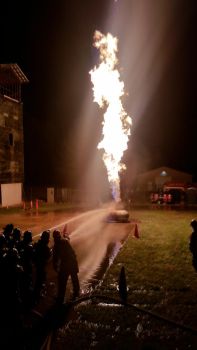 The bar was set extremely high for LaGrange firefighters and dozens of departments vying to become an accredited agency through the Commission on Fire Accreditation International (CFAI).

For Sgt. Mike Webb, that meant reviewing the LaGrange Fire Department’s protocols, procedures and policies. Anything that did not meet the accreditation criteria was revised and resubmitted to LFD’s 56 firefighters.

Then Webb had to thoroughly answer questions outlined by the commission –  all 256 of them.

He also met with the CFAI team of assessors when they arrived in early April to tour LFD facilities, inspect equipment and much more.

“They were very impressed with how we do things here, how we run the department,” stated Webb. “They (assessors) were impressed with the facilities and our programs.”

Everything looked good to the CFAI evaluators – except for the department’s lack of documentation.

The commission revised their accreditation requirements shortly before LFD submitted all the paperwork deemed necessary to be certified – or so they thought.

“All our programs: fire response, HazMat, search and rescue and EMS have to be appraised, which we always do. But we also needed documentation that said we (LFD) appraised those areas,” Webb explained.

While the LaGrange Fire Department met all of the commission’s 56 core requirements, evaluators chose to place them on a deferment list. They have six months to a year to generate the necessary paperwork and be re-evaluated for accreditation – without going through the entire process.

“They (evaluators) will send us a full report and show us exactly what they want to see (next time),” stated Webb. “It will be a road map on how we need to operate.”

This was LFD’s first attempt at receiving accreditation.

If granted, it places them with some of the most elite fire departments in the world.

LaGrange Fire would become only the seventh fire department in Georgia to be accredited, said Webb.

There are 31,000 public fire departments worldwide – less than 1 percent are accredited, he added.

Public Safety Director Lou Dekmar praised his firefighters and believes the deferment decision is still a positive outcome for the department.

“The purpose of accreditation is to develop and improve within the process, and we are going to take the opportunity to do that,” said Dekmar. “I expected their (LFD) first attempt at accreditation would be a learning experience.”

“It’s not the outcome we wanted, but it was also not a big shock they found some things we need to change,” said Webb. “We learned what we need to do and how to do it.”

Sgt. Webb hopes to have all the necessary documentation ready and re-submitted in six months.

While the on-site evaluators can recommend a fire department to be accredited, ultimately the decision is left up to the Commission on Fire Accreditation International.