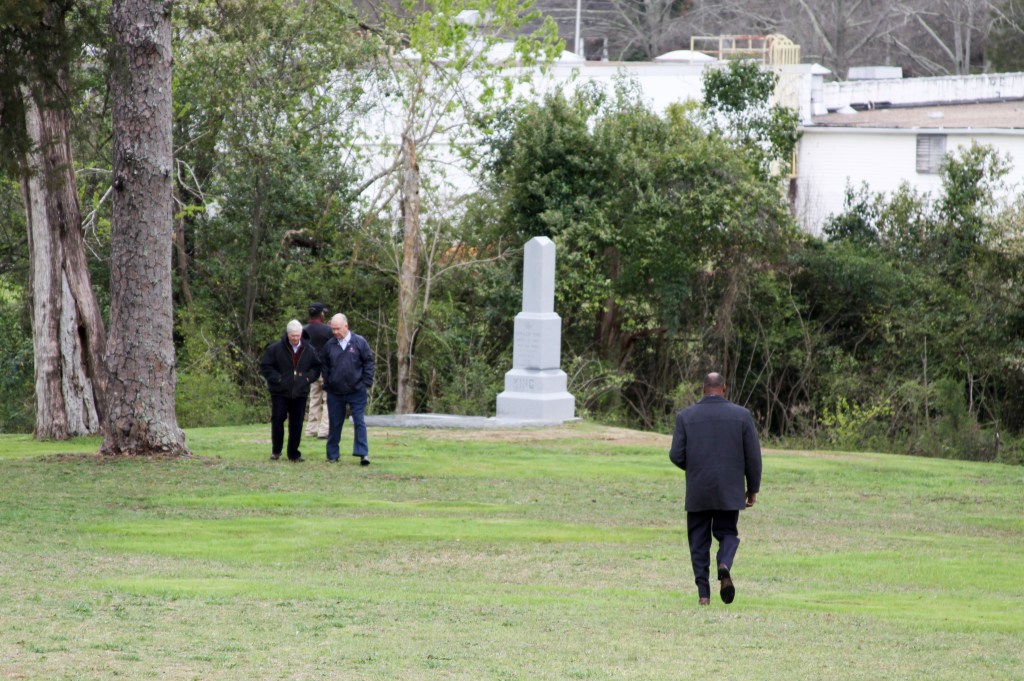 The new marker at Mulberry Street Cemeteries was dedicated at a ceremony in March. (File Photo)

LaGRANGE – A citizen came before the city council on Tuesday to discuss allegations that the city disregarded state regulations regarding Confederate memorials in their recent renovations of the Mulberry Street Cemeteries, where famed bridge builder Horace King is buried.

The alleged infractions regarded the removal of a Confederate flag from the cemetery and a monument that the Sons of Confederate Veterans placed on King’s grave that appears to have gone missing.

“In 1995, I came before the city council with a request to erect a flag pole inside (with) the third national confederate flag in the cemetery,” said Mike Hanners on behalf of the Georgia division of the Sons of Confederate Veterans. “It was approved by unanimous vote. We also got permission from some of Horace King’s last relatives living in Atlanta. We put a Confederate cross of honor on his grave, and it was supposed to stay there.”

The flag was replaced with the Georgia flag at the request of several citizens during the renovations at both the confederate cemetery and the adjacent cemetery where King was buried, which were approved by the city council in April 2016. The two cemeteries were also renamed at that time to Mulberry Street Cemeteries. A dedication of the new plaques and an obelisk to honor King and his son’s grave site and the 400 graves that were marked at that site took place in March.

“Back in 2016, Kaye (Minchew) along with the Georgia State Department of Tourism received a $12,000 grant to do the renovations to the Mulberry Street Cemeteries,” said City Director Alton West. “No marker has been removed identifying the cemetery. At the request of my boss, I was asked to have the flag taken down, and I did have that taken down, and I do have it here. We do now have the state flag up that is there flying in the Confederate cemetery. As far as the iron cross, there was a tree that was taken down by the river-side of Horace King. The city did not take that tree down. I do not know what became of the iron cross. I have consulted with city staff, and they have not seen it or know what happened to it.”

Hanners alleged that the removal of the Confederate flag and cross were illegal under the same Georgia law that was created in 2015 to protect Stone Mountain’s carvings, and he stated the possibility of taking a case before the county superior court or state supreme court if the city did not take some sort of action, but according to the city attorney that particular law does not apply to local governments.

Hanners argued that as a city corporation, the City of LaGrange should be covered under the law, and the Confederate flag should be put back up in the cemetery.

According to Hanners the Confederate cemetery was formerly called the Stonewall Jackson Cemetery – though there was no marker – and the current sign negates that distinction. Officials claimed that the sign covers both cemeteries at the site.

“I think when you actually renamed it you called it Mulberry Street Cemeteries, plural, and there is still the Stonewall – Confederate – cemetery, but then there is the separate cemetery where we went in and marked all the unmarked graves, and so forth like that,” said Mayor Jim Thornton. “But, the overall property is what is named Mulberry Street Cemeteries, plural.”

The city council agreed to take Hanner’s request under consideration, but the council does not plan to take any action until they have had a chance to review their options on the best way to honor everyone buried at the site. They plan to discuss further action at their regular meeting on Tuesday, May 23 at 5:30 p.m.