The dangers of dirt bikes 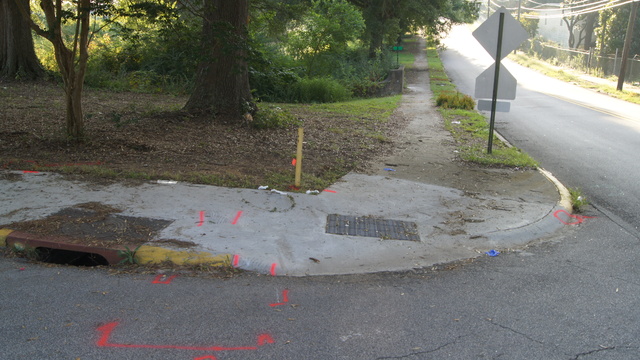 Orange markings and medical gloves can be seen at Fourth Avenue and Forrest Avenue where Marquavious Strickland, 16, died while riding his dirt bike. (Photo: File)

Warm weather and longer days means an increase in 911 calls for the LaGrange Police Department – especially for complaints about dirt bikes riding on the city streets.

“Virtually not one day goes by that we don’t receive a complaint about a dirt bike on the roadway,” said Lt. Mark Kostial with the LPD Patrol Division. “There’s not one particular area within the city that’s worse – we get complaint calls in the Hillside neighborhood, plus along Hamilton, Whitesville and New Franklin Roads.”

The calls for service regarding dirt bikes in LaGrange are also becoming more dangerous.

“Last week, a pack of 15 – 20 riders were running red lights and weaving in and out of traffic,” Kostial stated. “They caused a wreck between two cars at the intersection of Morgan Street and Lafayette Parkway.”

One person inside one of the vehicles received minor injuries from that crash, he added.

Nearly two weeks ago, a 15-year-old youth was seriously hurt when he allegedly lost control of his ATV while performing “wheelies” along Fourth Avenue, LPD officials said.

Sadly, in September of 2016, Marquavious Strickland, 16, was killed when the dirt bike he was riding collided with a Honda Accord at the intersection of Fourth and Forrest Avenue.

The driver of the Honda was turning onto Forrest Avenue from Fourth Avenue when Strickland passed on the left and hit the vehicle, investigators stated. That area is designated as a ‘no passing’ zone, police said.

The LaGrange High School student was ejected from the bike and later died from his injuries at an Atlanta hospital.

Instead of dirt bike and ATV owners taking more safety precautions, the riders are becoming bolder.

“I had a group of 25-30 riders coming straight at me, so I turned on my blue lights and told them to stop. Instead, they all went around me, just parted my car like an estuary, teens and adults,” stated Sgt. Del Armstrong with LPD’s Traffic Unit. “They just kept going. It was like they’re not scared of being caught. They (dirt bike, ATV riders) don’t want to be caught, but they have no respect for the law either.”

It is illegal in the state of Georgia to ride a dirt bike or an ATV on public roadways – including highways and interstates. The low speed motor vehicles can only be used on private property with consent from the land owner.

Those vehicles, which also include motorized scooters and wheelchairs, riding lawnmowers and more, are designed for off-road use only, Kostial explained

“They (vehicles) do not have turn signals. There is no vehicle insurance on them and no other equipment that makes it safe for them to be on public roads,” he said. “Sometimes, we catch young people riding dirt bikes who don’t even have a driver’s licenses.”

Kostial and Armstrong want to prevent another death and accident from occurring on the streets of LaGrange.

“We want parents to educate their children about the proper method of riding dirt bikes and ATVs – and take them where they can safely ride these vehicles. It’s not on street or state route, but on their own private property,” Kostial explained.

LPD officers are also going door to door and talking with vehicle owners about state laws and encouraging them not to put the bikes on city roads.

If riders are caught by police illegally driving a dirt bike or ATV on city streets, they could be charged with speeding, reckless driving and more, he added. If the bike is involved in an accident, it can be seized by investigators until the case is settled in court.

Last year, there were 2,359 wrecks within the city limits, according to Kostial. That number also includes two fatal accidents and 442 people who were injured in car crashes.