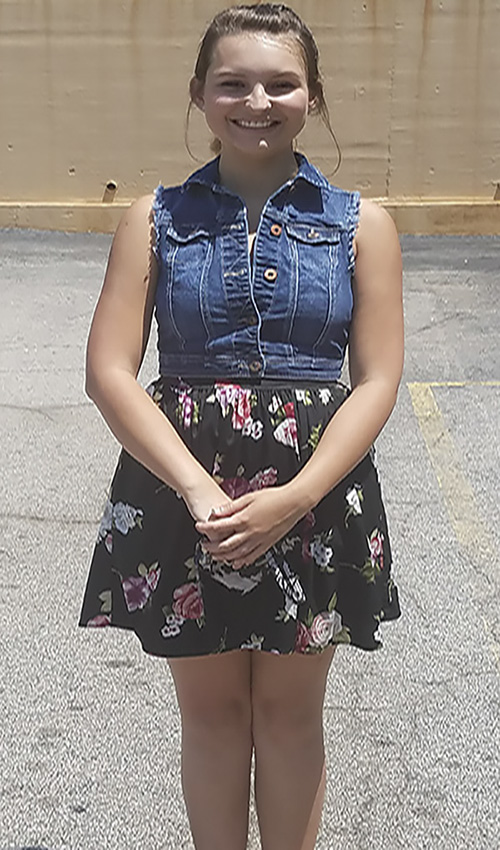 Grace Summers, will be the Valedictorian speaker for Callaway High School for student graduation on May 25th. (James Simpson II | LaGrange Daily News)

The Definition of Perseverance

LaGRANGE- Grace Summers is used to academic success. Not only is she used to success, but she has come to expect success in all she does.

“I’m the nerd,” said Summers playfully. “I’m all about keeping up my record and making straight A’s.”

Summers came quite close to achieving that goal during her four years attending Callaway High School, a feat which she is proud of.

So what comes with acing everything with flying colors in high school?

Dual-enrollment status and the opportunity to be valedictorian for her school’s graduation.

“It’s been real nice. It’s a lot of work, but I’ve definitely enjoyed it much more than my high school courses,” said Summers, who is currently a dual-enrollment student at the University of West Georgia in Carrollton. “It’s a lot more independent. There’s more independent studying, and overall I have more free time.”

Summers, who is also on the equestrian team at West Georgia, said she should have upwards of 50 college credits when she attends the University of Georgia during the fall semester, who plans to study mechanical engineering, and her classes and textbooks will be completely covered by the HOPE (Helping Outstanding Pupils Educationally) Scholarship.

However, getting to this point wasn’t always easy for Summers. Her path had some peaks and valleys along the way that she had to overcome.

When Summers was 16, she started to deal with an unknown sickness.

“At that time, I had been experiencing various pains since middle school. Being the kind of person that pushes through, and also being terrified of the medical side of it, I just ignored it and went on with my life. Until, it came to a point when I lost 20 pounds in one month and just started basically deteriorating.”

At the beginning of her sophomore year at Callaway, Summers said that she started going to see doctors constantly.

“We went through a lot of tests and other things to try and find out what this was,” said Summers. “They eventually found out that it was an autoimmune disease.”

An autoimmune disease is a disease in which the body’s immune system attacks healthy cells, and symptoms might include low grade fever and feeling tired. The cause is mostly unknown.

“Going through that, I spent many days in many hospitals, going place to place, doing chemotherapy, getting surgeries,” said Summers, recalling those exhausting days.

Due to her severe sickness, Summers was forced to miss an abundance of school days. Her body became so weak that she was not able to participate in activities that she enjoyed, such as playing in the marching band (where she was the drum major) or go horseback riding.

“The only thing that I had was my mind and I kind of threw myself into that full force,” said Summers. “I was determined to not let this disease have control of my life. That’s what I would tell myself.”

There were days where Summers would suffer low-key stomach pains, spend half her time not eating or drinking and sleeping constantly because she was so weak. Determined not to fall behind in school academically, she buckled down and hit the books with relentless pursuit.

Summers’ hard work paid off as she was able to keep up her grades in the first semester, but the challenge only continued heading into the second semester.

As Summers transitioned into her sophomore year, her condition worsened to the point that her family applied for the 504 Plan, and sent all the required information to the Troup County School Board of Education to review.

A 504 Plan is a plan that falls under Section 504 of the Rehabilitation Act of 1973 and is part of the federal civil rights law that prohibits discrimination against public school students with disabilities. It applies to a person who deals with physical or mental impairment that limits them from reading or concentrating on an activity. The plan helps meet the specific needs of a child by supplying them with accommodations, modifications and other services.

Summers said she and her family heard about the 504 Plan while at a children’s hospital in Atlanta.

“How it works is that the medical practitioner who assesses the child is supposed to send what they have to the school and it’s the schools job to evaluate the process,” said Summers. “At the time I weighed 74 pounds at 5’6” and had a BMP (Basic Metabolic Panel) of 12.1.”

Summer’s doctors sent a letter to the school to inform them of her sickness.

Summers knew how serious her state of illness was and assumed the school board would grant her the 504 Plan, but to her surprise, they didn’t.

Dealing with the frustration of the school system rejecting her 504 Plan proposal and trying to manage her illness, Summers stayed persistent and kept her grades up by attending class when she was healthy enough and stayed connected with her teachers about assignments.

Summers produced A-level work in her honors and advanced placement courses for her second semester, but missed too many school days before the quarterly evaluation period (every nine weeks) to receive an A in one class.

So, while Summers made an A in one of her courses, the school board dropped that A down to a B, which resulted in her not meeting the criteria for the Principal’s List, which is awarded to students who achieve an “A” average. After the board re-evaluated the situation, Summers was instead placed on the AB Honor Roll.

“It was a consolation prize,” said Summers. “All I wanted to do was maintain my all-A record in high school. I wasn’t interested in settling for a B or D.”

Since then, Summers said that she has been connecting with other disabled students like her, and has firmly expressed she is “not trying to slander and uproot the school system.” She simply wants to bring awareness and education to the issue to ensure students in the future do not undergo the same trials she has endured.

“I just want people to be educated and get the support they need,” said Summers. “This has been a two-year long issue. That was more than I could handle and to have that weight on top of me was more than enough.”

Since this time, Summers health has improved. She went on to finish her junior year with a 4.0 GPA and started taking college courses as a duel-enrollment student then, and in her senior year was elected as Valedictorian for her class at Callaway High School.

“I really didn’t know what Valedictorian was until my sophomore year,” said Summers smiling. “It wasn’t really on my mind but by junior year, kids would start talking about ‘I wonder who’s going to be the Valedictorian?’ Honestly, I just wanted the free money for college.”

Summers mentioned that when she makes her speech it might feel awkward, since she has not been active in school due to her dual-enrollment status.

“I still know some people and I’m still present there, but I’m going to make a speech saying ‘We made it’ and there are going to say ‘Who are you?’” said Summers, laughing. “That’s the only downside I see.”

As a Star Student winner, Distinguished Honor Grad and the only student in Troup County to receive the Georgia Scholar, which entitles her to a meal at the governor’s mansion in June, Summers owes a lot of her credit to two of her teachers.

“My Science teacher David Curtis is a spectacular teacher,” said Summers, who credits him for her interest in science that led to her becoming the first student to pass the SAT in Biology at Callaway High School. “That’s how much I liked his class.”

As Summers looks forward to the next chapter of her life in college after working so tirelessly and staying positive through her sickness, she’s still going to approach the upcoming phase with non-stop commitment and a chip on her shoulder.

“As far as I’m concerned, everything you do in high school goes out the window when you go to college,” said Summers. “You have to prove yourself again. You have to do that all through life.”

In a confident tone, Summers said, “I kind of like doing that.”

By Melanie Ruberti Melanie.ruberti@lagrangenews.com LaGRANGE – Domestic violence is not an issue just facing adults anymore. One in three... read more