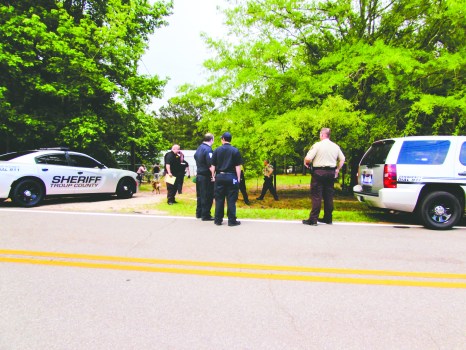 Deputies with the Troup County Sheriff’s Office and first responders converge near the front of the home off Robert Taylor Road where a man was allegedly stabbed in the abdomen. (Photo by: Melanie Ruberti | Daily News) 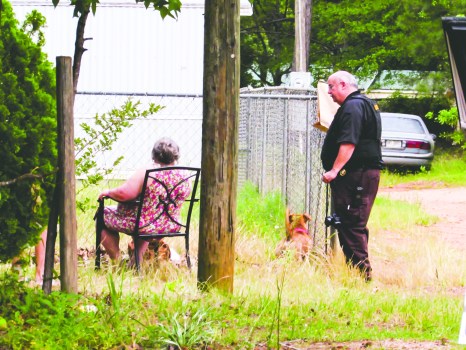 An investigator with the Troup County Sheriff’s Office speaks with a witness in front of the home off Robert Taylor Road. (Photo by: Melanie Ruberti | Daily News) 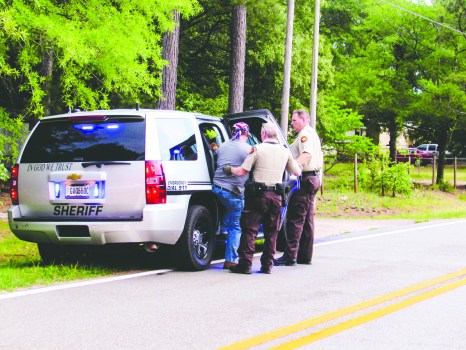 One man was taken into custody by deputies with the Troup County Sheriff’s Office at the scene of the crime. It was not known if the man was involved in the incident. (Photo by: Melanie Ruberti)

One man was reportedly stabbed during an altercation with his father in a home in the 100 block of Robert Taylor Road Wednesday night.

The victim allegedly showed up uninvited to the house and proceeded to get into a verbal fight with his father, said Sgt. Stewart Smith with the Troup County Sheriff’s Office.

The man then reportedly pulled out a knife and attempted to stab his father. At the last second, the father allegedly took control of the knife and stabbed his son in the abdomen, Stewart said.

The son then ran out the back door of the home.

Deputies called in a K9 unit to help them track down the victim, Stewart said. An ambulance and EMT’s stood on standby near the house.

It was unknown if they ever found the man as of press time on Thursday.

One man was taken into custody by TCSO deputies at the home.

It was not clear if the man was involved in the case.

One man was arrested for allegedly hitting his pregnant girlfriend and breaking out her car windows as they sat in front of a home in the 200 block of Peachtree Street.

The victim told LaGrange police she and her boyfriend got into a verbal argument as she drove him home early Wednesday morning.

The man, identified as Mondarius Trevon Wilder, 20, then reportedly smashed her cell phone and punched the glove compartment causing it to break, the report said.

When the couple pulled up to the house, Wilder allegedly picked up a rock and shattered two windows on the woman’s car, the report stated.

Wilder then began grabbing and shoving the victim around, officers said.

The man left the scene but returned while LaGrange police were still at the home.

He allegedly confessed to the crime, the report said.

Wilder was arrested and charged with battery and felony criminal damage.

A man discovered someone stole several items out of a home he was remodeling in the 500 block of South Lewis Street.

The man told LaGrange police the perpetrator(s) gained entry into the home through a basement door.

A screen door, sump pump and a wooden door were all missing from the house when the man returned to work on it on Wednesday.

The value of the items was estimated around $750.