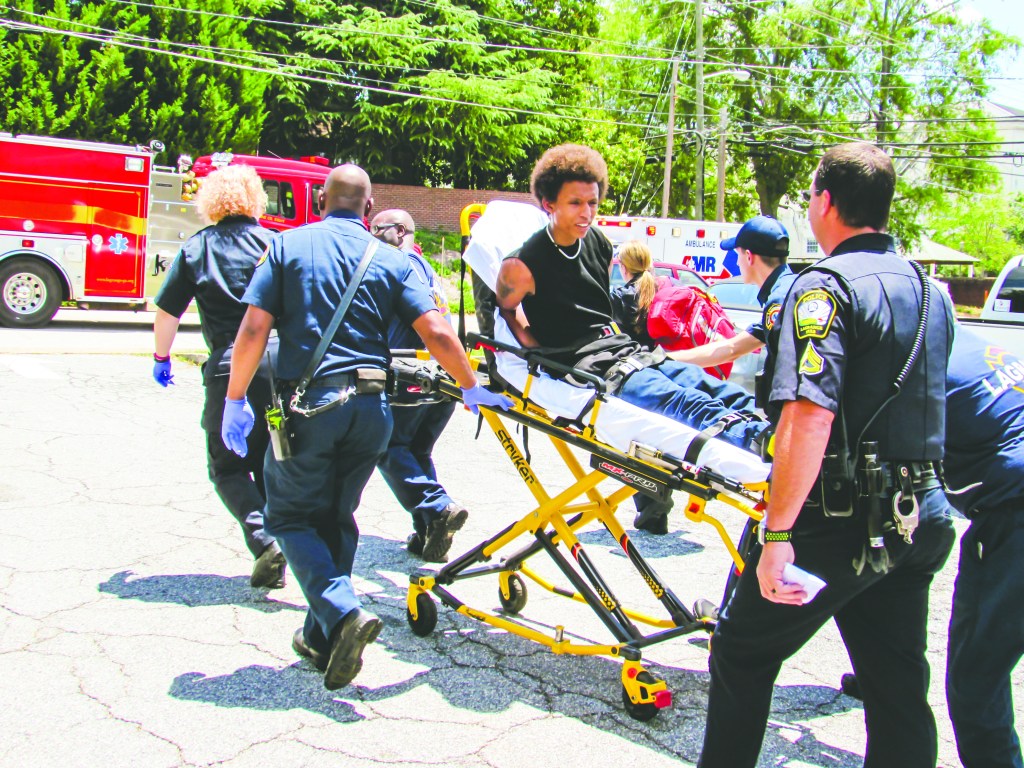 Austin Duffy speaks with LaGrange Police Cpl. Robbie Hall as he is led away on a stretcher - and handcuffed – to a waiting ambulance. (Photo by: Melanie Ruberti | Daily News)

A man was tased and arrested by LaGrange police officers after a brief foot chase through LaFayette Square just after 1 p.m. on Wednesday.

Officers recognized the man, identified as Austin Duffy, as he was walking through the square.

Officers gave chase and caught up with Duffy in the parking lot of an apartment complex at the corner of North Lewis and West Haralson Streets.

The man refused to comply to verbal commands by officers and was tased, officials said.

As Duffy was being handcuffed, he allegedly told LPD officers he swallowed a baggie full of drugs, officials said.

He was taken to WellStar West Georgia for treatment.

Duffy’s condition was not known as of press time Wednesday night.

Officers collected various items the suspect allegedly threw in the parking lot as he ran from police.

LaGrange Police did not say if Duffy would face more charges.

The on-duty supervisor at Troup 911 told LaGrange police the man called the emergency line more than 25 times since Monday.

The man allegedly used vulgar and abusive language toward dispatchers and never had an actual emergency, the report said.

He also reportedly called the Troup 911 administration line several times and the LaGrange Police Department at least nine times a day for a week, according to the report.

The man was charged with unlawful conduct during a 911 call.

Two cars and a business were damaged when a truck driver hit some cable lines on Madison Avenue near Youngs Mill Road just before noon on Tuesday.

The driver told LaGrange Police he did not realize there were low hanging lines. The top of his cab hit the wires and detached them from a nearby pole, police said.

The lines fell onto two parked cars and damaged them, the report said.

No one was inside either vehicle when the incident occurred.

The cost to repair the business, cars and restore the cable lines was estimated at more than $500.

A man told LaGrange Police someone stole his 1972 Chevrolet Impala from his home in the 400 block of Bacon Street on Tuesday.

The owner said he theft happened within a span of three hours while he was at the store, the report said.

The car was valued at $70,000 because of “upgrades” the owner made to the vehicle.