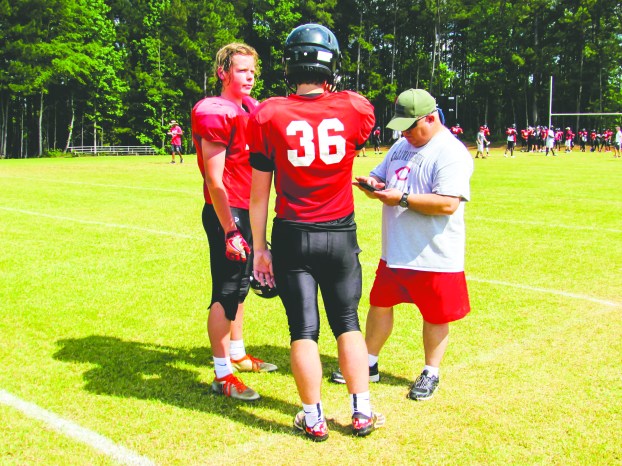 Hogansville Police Chief Brian Harr works with two kickers on the Callaway High School football team. The Chief sheds his police title and uniform in the afternoon and becomes known as “Coach” to his players on special teams. (Photo by: Melanie Ruberti | Daily News)

HOGANSVILLE – It is not a secret that Hogansville Police Chief Brian Harr is an assistant coach for the Callaway High School football team.

But it might be hard to pick him out on a playing field.

Harr sheds his police uniform, badge and even his title as “chief.”

Instead, he wears gym shorts, a t-shirt, tennis shoes and baseball cap – just like everyone else. He also makes sure his players only refer to him as “coach.”

“A lot of the players and even the other coaches didn’t even know I was the police chief at first,” Harr said with a smile. “They started calling me, ‘Chief,’ and I said, ‘Nope, just call me coach.’ I’m not the police chief here. This is a place I can come and just be a part of the group.”

Harr is the coach of special teams, so he oversees the kickers, punters and kickoff teams. He has been a part of the Callaway High School football team for three years.

“That’s your kick right there,” he yelled out to one his players during Spring practice on Wednesday.

“That was a 60-yard kick,” he said as he carefully watched another player line up the football.

“Coach Harr is a great leader of young men,” Head Coach Pete Wiggins said. “He coaches them hard so they improve with each practice … the players see his work ethic and dedication to the team. They admire him for it.”

For Harr, the football field becomes a sanctuary – away from the harsh reality of a demanding job.

“My day consists of making decisions that can affect people in a positive or negative way. Coaching gives me a chance to step away from the police work,” Harr said. “Some police chiefs and officers have hobbies. They like to fish or golf. But coaching is fun for me. “It’s fun to see the kickers develop their skills. The young players take their first kick and it is usually all over the place. They work hard and then you watch them make their first field goal or first touchback. They continue to grow and it is fun to watch that.”

The players had high praise for Harr.

When Noah Stephens, 16, joined the team he was not a kicker or a punter.

“Coach Harr taught me everything I know,” he said. “He spends time with us even though he has a busy job. That’s pretty special.”

“He’s out here by choice, working with us. He always finds a way to make us better,” said Hunter Williamson, 16. He is also a kicker on the Callaway High School football team.

At the end of the day, Harr said he hopes his players learns valuable lessons on and off the football field.

“Whatever they commit to in life, they will succeed at,” he said. “I hope they always do the right thing, even when people aren’t looking at them.”

By Debby Baker Contributing columnist The college’s Class of 2017 was urged to become “ambassadors of kindness” during commencement exercises... read more