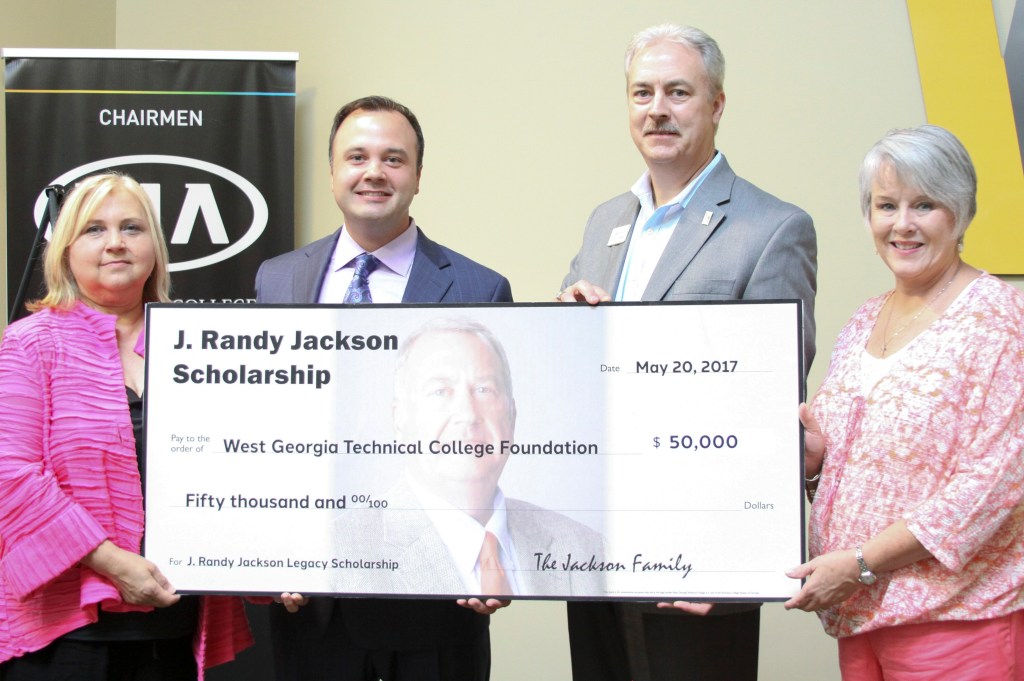 LaGRANGE – J. Randy Jackson’s legacy reached new heights on Monday when a scholarship was named in his honor which will continue his passionate support of THINC Academy.

While he was the chief administrative officer at Kia, Jackson helped find the funding to get THINC College and Career Academy started, which will help train locals for jobs like those offered by Kia and other manufactures in the area. The J. Randy Jackson Scholarship will allow freshmen entering West Georgia Technical College – especially students from THINC College and Career Academy – to afford to continue their education locally while learning the highly marketable skills required for certain manufacturing jobs.

“The one year mark (of his death) has come and passed this weekend, but his name, contribution and legacy lives on through our community and beyond,” Jamey Jackson said of his father. “His focus on workforce development contributed benchmark labs at West Georgia Technical College here in LaGrange as well as THINC College and Career Academy, but the list by no means ends there.”

The scholarship will continue indefinitely thanks to a $50,000 endowment, and while the scholarship focuses on THINC students, it does not show a preference toward a specific discipline because that was what his family felt would best honor Jackson’s memory.

“He had a very deep passion for kids,” Kia Chief Administrative Officer Stuart Countess said. “He was very much involved with these students, and he heard what they had to say when it came to change and lives and their future. … That’s where his eyes were, always about what was going to happen in future generations.”

The event took place in a hallway at WGTC between THINC classrooms and WGTC classrooms which was appropriate considering the partnership that the scholarship highlighted between the two.

“He would have been proud of the partnership, and the fact that we are right here at the perfect venue as we have students come and go out of THINC, and we are at the crossroads right here,” WGTC President Steve Daniel said. “… I do count on all of us to build this (partnership). This is the start. Let’s build this and help more students.”

THINC has quickly become known within the community as the place for focused high schoolers to go to begin their path toward careers in areas like health science, engineering and mechatronics.

Jackson’s family challenged both individuals and companies to contribute toward the scholarship during the ceremony in order to help support the most important part of the school, industry relationship – the children.