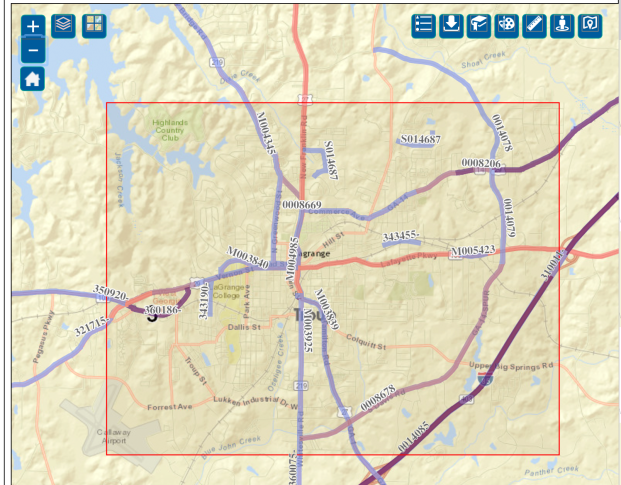 This Georgia Department of Transportation shows where construction is currently taking place with pink shading and where future construction is planned with purple shading. The dark purple lines indicate areas that are under the state work program. (Submitted)

LaGRANGE – Everywhere you turn right now there seems to be fresh asphalt on roads in Troup County, and it’s all thanks to a series of Georgia Department of Transportation projects.

Local officials are always fans of state funded infrastructure improvements within the county, and they are quick to give the credit for the massive paving project to the state.

“Troup County Road Department has not done any paving this year, so all of the paving that you are seeing is state highway under contract,” County Engineer James Emery said. “There are multiple state highway projects that are underway right now – all of them with the same contractor that won the bid on those, C.W. Matthews (Contracting Company) – and so there is a lot of paving work going on right now, but none of that is Troup County Road Department paving.”

“I’ve been very appreciative that they’ve been doing a lot of this paving at night instead of during the day,” Commissioner Morris Jones said. “It surprises me when I’m coming in from (Highway) 27 coming in or (State Route) 109 west coming in. There is still a lot of traffic out there at night.”

The night paving is a GDOT requirement due to the heavy traffic in some of the areas being paved.

“GDOT did not want to allow big traffic disruptions right in the middle of our rush hour and peak traffic hours,” Emery said.

The Troup County Board of Commissioners is scheduled to meet again Tuesday at 9 a.m. for its regular meeting. An additional meeting will be held at 6 p.m. that same day for public comment on the millage rate, which is expected to remain at the same level going into the next fiscal year.

By Melanie Ruberti Melanie.ruberti@lagrangenews.com     Public Safety Reports A woman told LaGrange police someone stole $600 from her when... read more