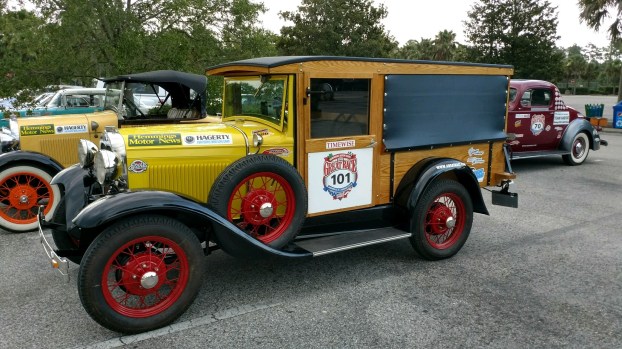 Swanson plans to drive a 1930 Model A Ford on the 2,000 plus mile cross country trip known as the Great Race. This will be the first year that he has competed in the race. (Submitted)

Great Race to travel through Newnan

Former LaGrange resident Perry Swanson is off to the races in his 1930 Model A Ford this weekend.

Participating in the Great Race, he will face other vintage car competitors in a road rally that starts in Jacksonville, Florida and finishes in Traverse City, Michigan.

According to The Great Race’s website page, the race is about facing obstacles rather than speed. It starts on June 24 and will wrap up July 2.

The race is an antique, vintage and collector car competitive controlled-speed endurance road rally on public highways, according to The Great Race website. The race requires the teams to drive at or below the posted speed limits at all times.

“It’s the first time I felt like I could participate,” said Swanson, who now lives in Douglas, Georgia.

Swanson has been collecting parts for the car for years, and is excited to finally be able to join the race.

“A year ago, it was half finished,” he said. “When I found out about the race, I concentrated on finishing it in the last 12 months.”

Each driver in the race receives a set of course instructions that they must make throughout the day. There are usually 225 to 250 instructions per day, according to the website.

Along with winning the main race, prizes are also given to the newcomers.

“[I] have a good chance of winning the rookie class,” Swanson said.

According to Swanson’s son Nathan, his father was interested in cars since high school, and that passion has followed him into adulthood.

“He actually drove a Model A to high school,” Nathan Swanson said.

Swanson said his father reconstructs engines for a living.

“He rebuilds Model A and Model T engines,” he said.

Nathan Swanson said he is supporting his father no matter the outcome of the race.

“Hopefully he can pull it out,” Nathan said. “I’ll be proud of him either way.”

The Great Race will stop for lunch in Newnan on Sunday before continuing north toward Armuchee, Ga.

Camp Viola making difference for area children On Thursday at Camp Viola, another group of children were finishing up a... read more