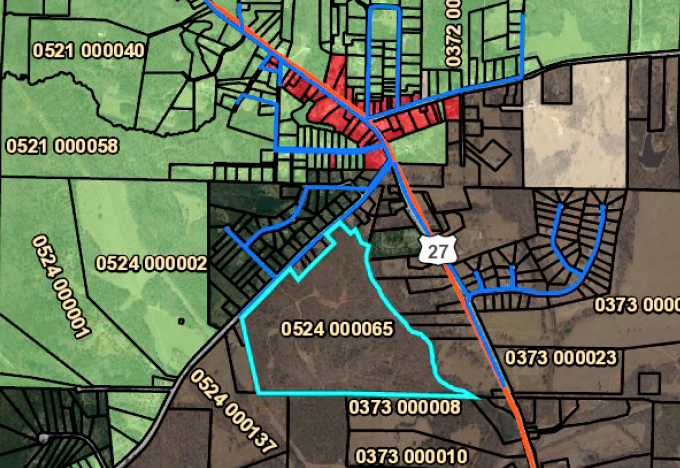 The Troup County Board of Commissioners are considering rezoning for a subdivision on Bartley Road shown here on the zoning map. (Submitted)

Last week, the Troup County Board of Commissioners considered a request to rezone a property on Bartley Road from agricultural to a single family, medium density development.

Other residents of Bartley Road were skeptical of the proposal though due to the increased traffic and housing density that the development would bring to their neighborhood.

“I personally moved out there for its rural character and its rural nature, and as I raised the question, ‘What is going on here?’ (in the neighborhood) I came to see a lot of people who just did not want to see this kind of increased density in our area,” said Joshua Harrelson, a resident of Bartley Road.

Harrelson expressed concern for the subdivision’s potential impact on surrounding home values. Other residents have also expressed concerns over the development in earlier zoning board meetings and through a petition.

“There have been comments phoned into our department and also a petition from the Board of Zoning meeting,” Senior Building Official Jay Anderson said.

Jones could build roughly 40 homes on the property under the current zoning, and according to Anderson, the pricing would be toward the high end of the pricing range of homes currently in the area. The subdivision would also have significantly larger lots then other nearby subdivisions.

“It was about 10 to 15 one to two acre lots, and it was still going to be about 30 lots that were 2 acres to 5 acres, so it wasn’t a lot of lots that were in the one to two acre (range), more of them were in the two to five acres,” Anderson said. “A lot of that subdivision is still going to be lots that would still meet the size standard for agricultural residential, and there will still be quite a few big lots just because of the way that the land lays out.”

The land is currently being used for timber and hunting.

“It is currently a vacant wooded parcel, and the proposed use is for a residential subdivision,” Anderson said.

The county’s future land use map has the property listed as agricultural, though because of the two other nearby subdivisions the development would not be completely out of character for the area. The subdivision would be within range of utilities like gas and water from the City of LaGrange, which the development would likely be impossible without. The access to city water is also expected to result in lower home insurance premiums for residents of the proposed subdivision because of the ease of installing fire hydrants.

“As far as impact on this community, I can guarantee you there will be a subdivision on this property – it is not a question of whether or not we are going to do it (because) we are going to do it — but we would like for you (on the board of commissioners) to grant us 11 extra lots,” Jones said.

The staff recommendation was for approval on the condition that the number of lots remain under 50. The zoning board voted six to one for denial.

The Troup County Board of Commissioners plans to vote on the rezoning on July 11 at 9 a.m. at 100 Ridley Ave.

A decade of creativity