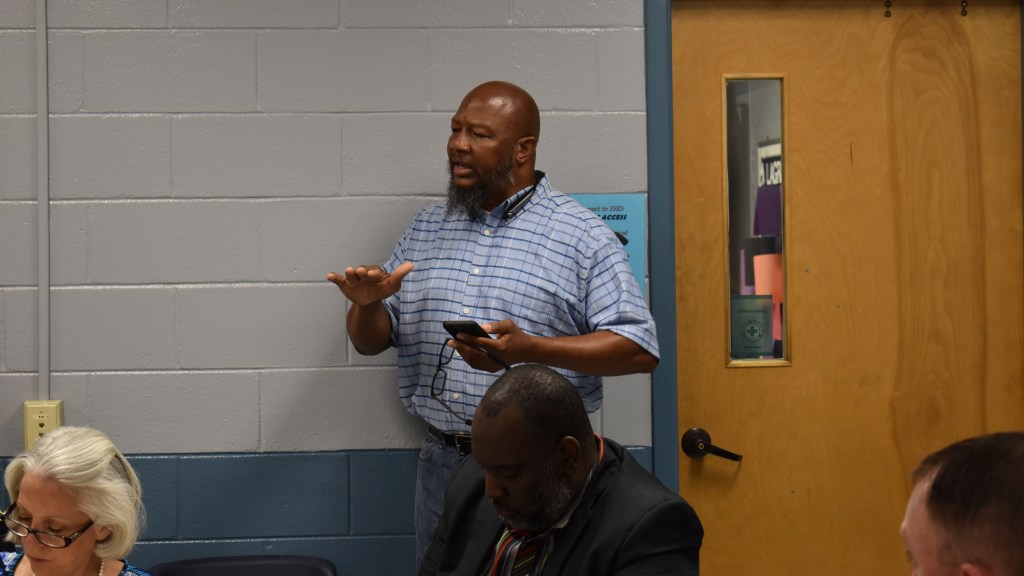 Ernest Ward speaks to a group gathered at the LaGrange Police Department on July 11. Ward is the president of the Troup County branch of the NAACP. (Photo by Baker Ellis | LaGrange Daily News)

The LaGrange Police Department hosted a Community Outreach meeting on July 11 that was attended by more than 40 community and faith leaders. The purpose of the meeting was to open dialogue between various organizations from Troup County and explore ways to collaboratively solve issues taking place in LaGrange and the surrounding area. While much was discussed in the meeting, the topic that demanded the most attention was the upcoming Criminal Record Restriction Day, which is taking place October 14.

LaGrange Police Chief Lou Dekmar saw an opportunity, approximately three years ago, for the police department to partner with the faith community and non-profit businesses in this way, and has been holding the meetings on a consistent basis since that time.

“There were a lot of opportunities for the police department to support various efforts, many of which were faith-based or non-profit,” Dekmar said at the meeting. “In order to find out what role we could play in support of those initiatives, we gathered together 25 or so individuals together, and it has morphed through word of mouth into what it is today.”

Updates and information came from various community leaders, including John Harrell, an assistant program coordinator for the Children’s Advocacy Center of Troup County; Ernest Ward, president of the Troup County Branch of the NAACP; Carrie Busch with 808 Ministries; and Sandra Brownlee, CEO and founder of Discovering Soldiers Potential II. All spoke to the work their various organizations are undertaking within the county.

Harrell is a dedicated advocate for the Darkness to Light Stewards of Children program, which seeks to train and equip adults to prevent, recognize and react to child sexual abuse. Harrell and Twin Cedars has reached more than five percent of the Troup County adult population, and is now aiming to eclipse the 10 percent number.

Ward spoke to the need for a quality education for all students within Troup County.

“Poverty steals the very life out of many of the students and the people that we serve,” Ward said. “Education is one of those things that has the ability to minimize the impact of poverty. One of the things we would like to see is that every child in Troup County receive a quality education.”

The topic of discussion that dominated the majority of the conversation, however, centered around the upcoming Record Restriction Day.

“This is for people who have been charged with a crime where the case was dismissed, where they were found not guilty, or some misdemeanors that were committed before the person turned 21 and it has been five years since that time and have committed no other offenses,” said Sgt. Marshall McCoy with the LPD Community Outreach Unit.

“These people are eligible for a record restriction, so that when they go apply for a job, that does not show up on their record, they’re not having to explain things that were dismissed.”

The Record Restriction Day is taking place October 14 and will last from 10 am – 2 pm in the Griggs Recreation Center, and the only people eligible for this service are people who have been arrested by the LaGrange Police Department or the Troup County Sheriff’s Office. There will also be a job fair taking place adjacent to the Record Restriction Day.

To go through this process alone can be costly and time-consuming, which is one of the reasons why the Sheriff’s and police departments decided to move forward with this service.

“It’s a pretty lengthy process and at times can be a costly process,” McCoy said. “One of the things Chief Dekmar and everyone else concluded was we wouldn’t charge that fee to obtain the record and then follow it through the process. We’re actually taking the records and following the process for them.”

In the interim, the LPD is taking the first 300 requests before the Record Restriction Day, up until Sept. 14 to allow a month reprieve to funnel all received cases through the court system appropriately.