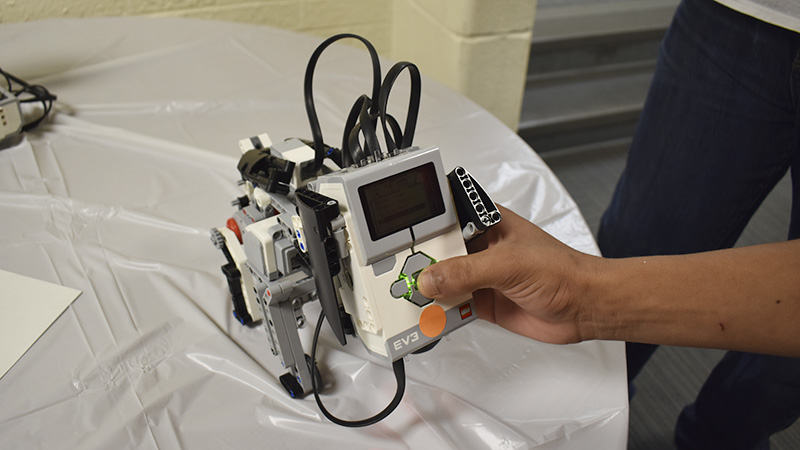 After six weeks of learning and creating projects, the students of Twin Cedars Summer Enrichment Program held an open house for their parents on Friday.

The summer program is run for emotionally and behaviorally disturbed eight to 16-year-old boys at the Ault Academy. During the summer program, the boys also learn through creating projects, such making models with 3D art pens and by building robots.

The science teacher for the program, Aruna Sunderraj, said that the projects are aimed at helping the boys learn and gain tools to succeed after they leave the program.

“Whatever you do in the summer program, the aim is to make you succeed,” Sunderraj said. “That was the aim of the whole enrichment program is to build some characteristics that will make them succeed.”

The summer program’s goal is to extend what the boys learned during the school year, so they can further enhance those skills.

“We extend what they learned in the year. So, we did robotics,” Sunderraj said. “It’s a lot of self-learning, self-discovery. I didn’t have to teach much, they figured it out. They programmed and made it work.”

The boys also made models of buildings and objects with 3D doodle pens, such as miniature guitars and the Eiffel Tower.

“It’s like a glue gun, you charge it and put it on and it melts plastic. You can write and draw in 3D,” Sunderraj said.

Sunderraj also relayed that the program gives the boys the chance to learn at the same pace as children at their same grade levels, while still going through therapy.

“We have this little school here so they can keep up their education while they go through therapy. Once they finished with therapy they join the regular school and they don’t miss out on all the educational credits when they are here,” Sunderraj said.

“It’s all about helping them succeed.”

Fund development and marketing associate Joanna Angstadt said part of the camp is to encourage the boys that they are not their mistakes.

“We want to help them learn they are not their past, (we want them to) get past everything that has happened to them,” Angstadt said.

“I just want the parents to come and see what their kids are doing. And they’re very happy what their child is doing here,” Sunderraj said.

“We have this every year and different teachers come and do some enrichment,” Sunderraj said. “We want the community to know that our organization does more for the kids.”

Sunderraj said the boys’ education is the same level as it is at other schools.

“The kids are learning just as much as another other kid in any other part of the state. They are doing the same level of work and learning and we have positioned them to succeed,” Sunderraj said.

“If they level and go to regular school they wouldn’t feel more different.”