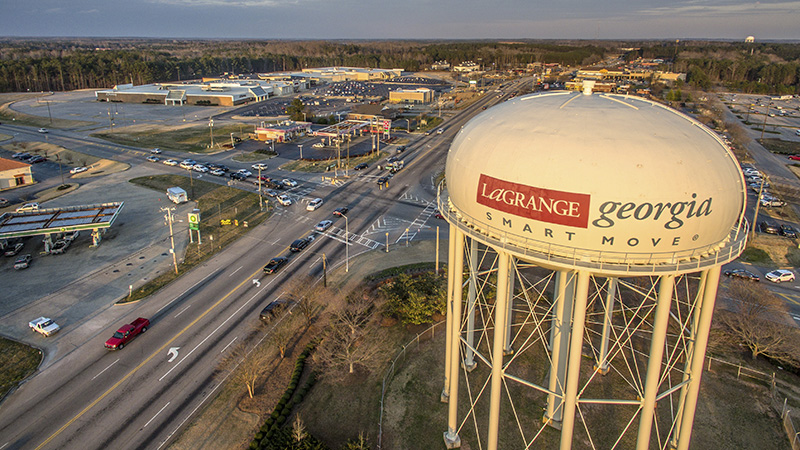 The water tower in LaGrange is shown from Pat Healey’s drone. --Pat Healey

“I want to be able to use drones to take this and do different types of videography, things for not just commercial purposes but for all over. And I think there’s a lot we can bring to the community because a lot of people don’t know anything about LaGrange,” Healey said.

“We’ve been here for two years now and if you asked me before we moved here ‘what’s in LaGrange?’ I couldn’t have told you anything.”

Healey has already posted videos of his drone shots of the town and surrounding area on his Youtube channel, Pat 4k. He said he wants to show people what LaGrange has to offer people.

“That was part of the video I did, the one about LaGrange, to give people a little view that haven’t been here before. Because if you haven’t been to LaGrange you’re going to look on the map and you’re going to say ‘there’s nothing here.’ It’s actually a beautiful place,” he said. “I want to get involved in the community, do more outreach that way, we can bring in more businesses locally, and just go from there.”

A former car dealership general sales manager, Healey said he wanted to pick up his passion again. Before working in dealerships, he once worked in commercial real estate photography with the Wyndham hotels company in Florida.

“I’ve been working in the car business, running dealerships, and the car business hasn’t been getting better over the years, so I started this back up so I can get into this and do it full time and go from here,” he said. “I want to branch off and do a lot of different segments, before when I was doing it, I just was doing commercial photography with companies.”

Originally from Albuquerque, New Mexico, he said his previous jobs working in car dealerships eventually moved him to LaGrange.

“I have moved around a couple of different places in the southeast with dealerships, just taking opportunities when they presented themselves. Then we ended up in Chattanooga, Tennessee and that was prior to us coming to Georgia. Then we moved to McDonough and then we moved here two years ago and have been with Mike Patton and actually just left him that way I could do this full time,” he said.

Healey said he started taking photos when he was a kid, but he only began using drones for photography after they became more commercial.

“I started using drones for fun, just for flying without taking any pictures when they first came out years ago. Wrecked plenty of them, trashed them all, my wife hated it because they were all another expense,” he said. “And then, I started getting the bigger ones, the nicer ones where you could record video, shoot photos, and that just opened up another aspect of how you can capture stuff.”

Healey already has taken photos of community events, like the Great Dragon Boat Race and the Thread Ribbon Cutting. He said he enjoys going to the events without feeling pressure to get his photos right.

“I like going to any type of events, going out where I can meet people, you know it’s something that’s a little bit different, a little less pressure, you don’t have to worry if people are critiquing your work,” he said.

In addition to his videography of the area, Healey also makes short how-to videos on drone technology and photography.

“My biggest thing for me is anytime I can’t figure something out, I Google it and try to find videos. Some of the most frustrating things is when you’ve got to sit there and try to find one simple little answer and you’ve got to watch a 20-minute video trying to figure out where it’s at,” he said. “I’m going to start making a lot of 30 second to one minute videos just on very specific things to do with drones, photography, tech computers.”

Charlene Healey, his wife, said she thinks this career move is good for him even though she’s losing sleep.

“Now he’s got me working from the time I wake up until like midnight or one o’clock in the morning,” she said. “I am happy that he is pursuing what he is passionate about. We’ve been just kind of going along with his jobs and this has just always been his passion and now he gets to actually pursue it and get to hang out with [me and our son].”

‘It sews together the community’