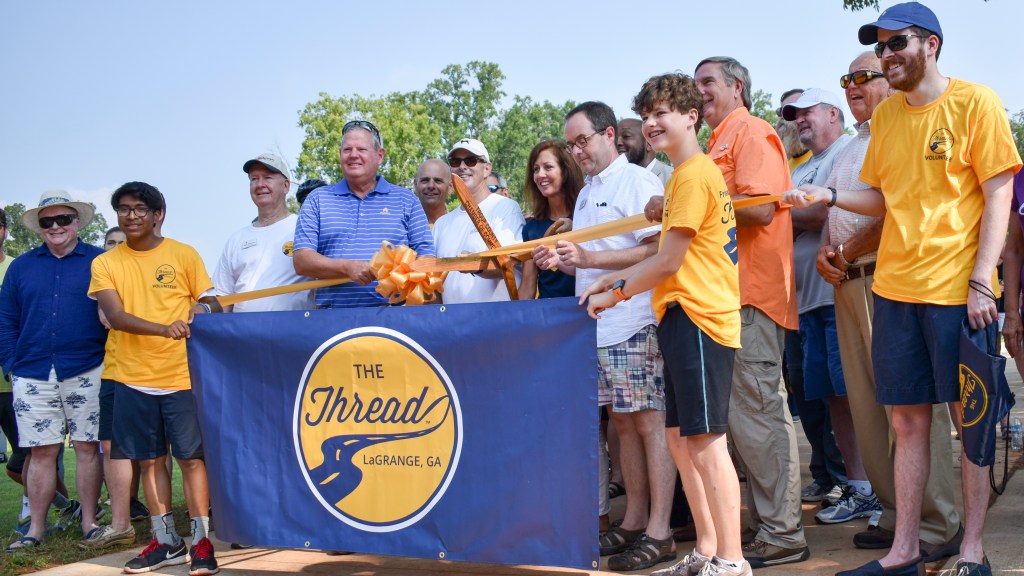 Officials cut the ribbon on the model mile of the Thread. The model mile is the first 1.3 miles of the proposed 29 mile trail system which will be funded through a combination of grants, donations and SPLOST funds. (Photo by Alicia B. Hill | LaGrange Daily News)

City officials are excited about the opening of the Thread, but are now dealing with a new problem created by the trail’s popularity.

Many people are parking along certain parts of the road in order to make use of the new walking area and adjacent parks and it’s already becoming an issue on the narrow road.

On Tuesday, the LaGrange City Council voted to restrict parking on a portion of Hunnicutt Place due to safety concerns for both motorists and pedestrians.

“As we have developed the Thread, it (has a) front along a portion of Hunnicutt Place, and we are having some issues with people parking on the Thread,” City Manager Meg Kelsey said. “We have tried to encourage folks not to do that, but we think that it would be prudent to actually yellow curb (that area) and create a no parking ordinance to do that.”

The proposed ordinance would cover approximately 988 feet of the Thread between Lakewood Drive and Granger Park where parking was already discouraged.

“We need to go ahead and paint it so that people know (not to park there),” City Planner Leigh Threadgill said.

The city has made an effort to accommodate football players and others who may need additional parking by creating a gravel parking area near the track, and several expressed safety concerns if cars continue to park in the road.

“It is a little bit narrower now that we have put the Thread segment in there, so it is a little tighter, and people really don’t need to be parking there,” Kelsey said. “We already have accommodated parking with the gravel that we’ve put down next to the track areas, so that there is a little more area for off street parking for those individuals to park. There is also parking right there in front of the track.”

Council members also expressed concern for pedestrians in that area where people regularly need to walk around for many reasons besides just the Thread, like the park, tennis courts, practice field, track and LaGrange High School.

“I think we need to lower the speed limit to 20 mph because you’ve got to watch going through there,” Council Member Nick Woodson said.

The master plan for the area included speed tables that would force traffic to slow down, and staff promised to discuss the possibility of adding speed bumps or tables in that area with the LaGrange Police Department. Other options were also considered during the meeting though.

“A lot of people get caught up in what they are doing, and they just don’t realize (how fast they are going),” Council Member Mark Mitchell said.

Mitchell, who has public safety experience, suggested putting up a sign that informs drivers when they are driving too fast on that section.