First Responder of the Week: Kirby hitting the right notes for police dept. 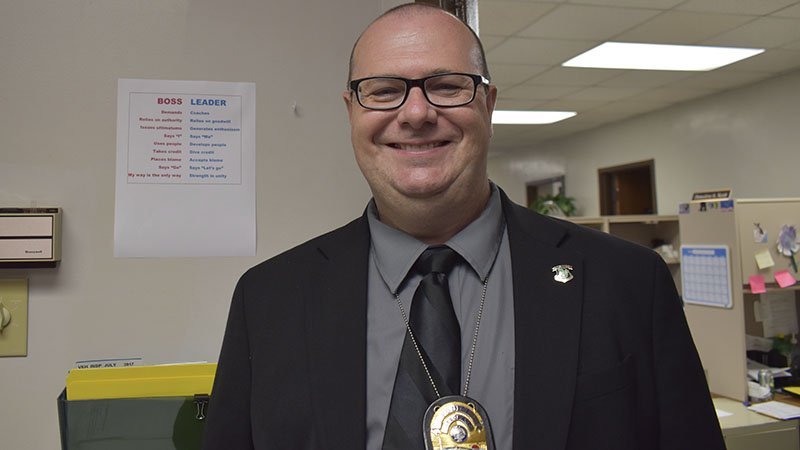 LaGrange police Sgt. Robert Kirby is hitting the right notes in and out of work. Before the sergeant was patrolling with the police force, he was teaching music as a band director in Trenton and Lithia Springs before coming to LaGrange to teach for both the private and public schools.

“I taught at Whitesville Elementary School and then after three years there I transferred to Callaway Middle School as the band director for a couple of years,” Kirby said.

Kirby taught for eight and a half years before taking a sabbatical to pursue a master’s degree in music composition from Georgia State University. While pursuing his degree, he decided to switch his career path from teaching and composition to joining the police force after working as a part-time security officer for Six Flags Over Georgia.

“While I was doing that, I really liked that kind of work. I got really interested in law enforcement through working security,” he said. “So, then I applied as a police officer in LaGrange, and I was hired here.”

He stopped pursuing his masters and joined the LaGrange Police Department in 2003. Kirby worked his way up to sergeant after 14 years of being on patrol and as a detective.

He got his master’s degree in public safety administration from Columbus State University in May of this year. He said that while he liked music education, he felt it was not his life’s calling.

“I didn’t hate teaching; everybody has a purpose and I thought that was my purpose. Once I started it, I really didn’t think that was my purpose,” he said. “But I enjoyed a lot of it and I do miss kids and miss doing music every day. I still do it as a hobby because I still write in my spare time.”

When off duty from work, he writes and composes pieces.

“In police work you see a lot of things that are disturbing and music gives me a way to cope with some of the things I see,” he said. “I use it after work to relax.”

Kirby played music growing up and can currently play the piano, saxophone, tuba, euphonium, trumpet, clarinet and flute. In college, he played tuba for the Jacksonville State University Marching Southerners.

“I play several instruments, none of them well. As a band director, or if you’re a music major, you have to learn a little bit about every instrument,” he said. “So I can play a little bit, but I’m kind of good on a couple of them.”

By the time he was in high school, he could play music after listening to it first; he was also interested in singing in choir.

“When I turned 16, I got my driver’s license of course and I wanted to go to church with all of my high school friends,” he said. “So, I went to the Baptist church and I joined the choir there, and that’s when I started singing in choirs.”

A member of the Choral Society of Western Georgia, one of his favorite pieces he composed was setting the Serenity Prayer to music. He originally wrote it for the death of Molly McBride, the daughter of his college marching band director.

“I wanted to do this for a long time, I would start something and then say ‘I hate that it’s not working.’ Well something came to me as a result of this and I wrote a piece of music, and within a whole week I had it finished,” he said. “I sent it to Dr. McBride, the director, and I said ‘hey, would you mind if I dedicate this to Molly?’ and of course he was overwhelmed by that and arranged for the chorus of Moorhead University in Kentucky to perform it.”

The piece was premiered by the Moorhead University college choir 2013.

Kirby said McBride was in China with the president of Moorhead University when he got the call from his wife that Molly had been killed in a car accident. Kirby said it was a coincidence that the two also prayed the prayer of serenity.

“On the way back the president said ‘Look, let’s pray together’ and they prayed the prayer of serenity and I didn’t know about it until after the concert,” he said.

“I sent it to my choir director because I knew she was looking for a variety of music. We sang it last November at the Thanksgiving concert.” Dr. McBride flew down from Kentucky to attend the concert, it was really cool.”

As for singing in the church choir every Sunday, he said he will just sing with the rest of the congregation.

“Sometimes I’ll step in and help out the choir, or they’ll ask me to, but usually I sit in the congregation and sing back there. I make my joyful noise sitting in the back instead of the front.”