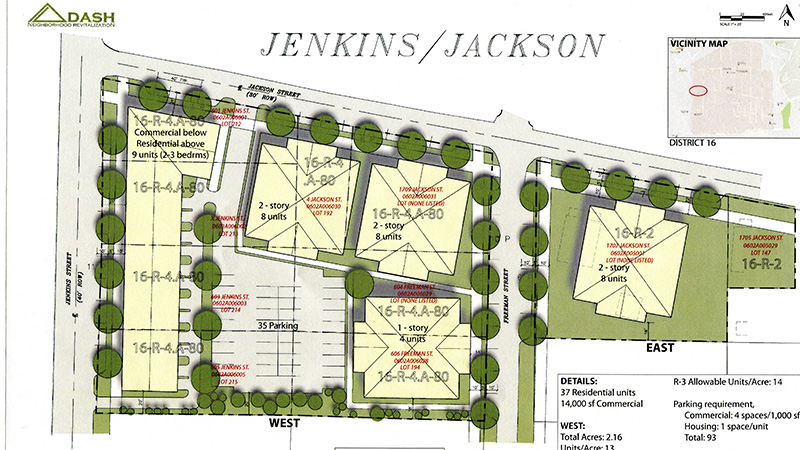 DASH submitted this plan for the Jackson Street properties along with its rezoning request to the City of LaGrange. (Submitted)

On Tuesday, the City of LaGrange considered a series of rezoning requests from Dependable Affordable Sustainable Housing that would allow the group to move forward on senior housing projects in the Hillside neighborhood.

“DASH engaged the Sizemore Group, which is a planning firm, to come and do some updates to the master plan for Hillside, and they are working now on implementing some of the recommendations that Sizemore developed in that process,” City Planner Leigh Threadgill said. “It was a very community engaged process with a lot of participation from the residents in Hillside, so they’ve come now to the city asking for some zoning changes to allow the development of land that has been suggested.”

The plans for the property show 37 residential units and 14,000 square feet of commercial space. These apartments will be marketed to seniors.

“In this particular development, those homes are for seniors, and there will be a mix of market, income and some restricted income level (pricing) on those quad units where the buildings are sort of square,” DASH Executive Director Marie McNally said. “(Restricted) means that we would hold them for people at a lower income level.”

603, 605, 607 and 0 Jefferson Street are under consideration to move from residential zoning (C-3) to general commercial or office, institutional, residential. The plan for that property shows 18 residential units and 2,400 square feet of commercial space on the 1.29 acre property.

Officials expressed hope that the developments will solve part of the need for affordable senior housing in the city while keeping the character of the Hillside neighborhood.

“We do frequently hear from residents about the need for more senior housing, so obviously, there is a market and a demand for that,” Mayor Jim Thornton said. “What I hear is there is an availability of low income housing, and there is a lot of availability of high end, but there is not much in the middle.”

According to McNally, the apartments will be in that medium price level once they are built, but the plans are part of DASH’s long term plan for the area. Most of the property being considered for the zoning changes is currently vacant, and the planning board voted in favor of the rezoning which it did not believe would have a negative impact on the neighborhood.

“Hillside is a mixed use kind of neighborhood,” Threadgill said. “It is a traditional neighborhood, and I think that is one of the things Sizemore really homed in on in their planning efforts was to get the balance of use correct, and recognizing that residential density should assist in any commercial endeavors in the neighborhood.”

The project also takes into account other long term city projects like increasing the number of sidewalks with a similar width to the Thread trail.

“They did take into consideration multiuse paths for any pedestrian areas that are 10 feet wide, so it kind of hits that trail mentality. We really want to provide active transportation alternatives for people in this neighborhood to get around,” Threadgill said.

The city council also held a public hearing on the rezoning of a piece of city property located at the end of Corporate Park East from mixed use to general industrial. Thornton said that the city wants to rezone the property in order to sell it to a company that is expected to come to town.