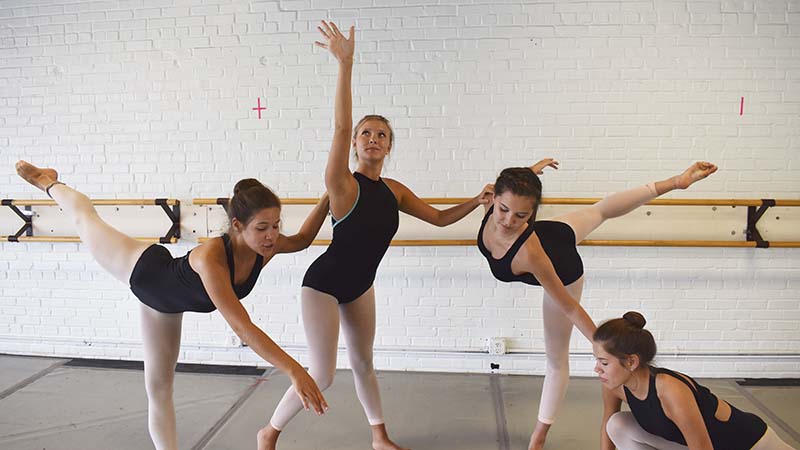 American Ballet Theatre dancer Gray Davis has leapt back to some of his dancing roots in LaGrange this week at the Lafayette Center for Dance. Born in Greenwood, South Carolina, he moved to Peachtree City when he was young. His first dance performance, however, was with Lafayette Ballet when it was originally called LaGrange Ballet in 1997.

“It’s been 20 years since I did my first show and it was ‘The Nutcracker’. I was the Nutcracker Prince,” Davis said. “It’s sweet coming back to where it all started.”

This week, Davis is teaching ballet students at the center an excerpt from ‘Le Corsaire’ for a showcase on Friday. Davis said he likes giving back to the community and inspiring the local dancers.

“I like teaching because I get to give back and share knowledge I’ve picked up over the years,” he said.

“I’ve had a 12-year professional career so far, and again, this is where I started, so it’s nice to show these kids that we come from the same background and their possibilities are endless where they can go, so it’s fun for me to share that.”

Davis joined the ABT’s Studio company in April 2005. He joined the main company as an apprentice in January 2007, and became a full company member by December 2007, according to the ABT’s website.

Amy Orr, Lafayette Center for Dance director, said Davis can be seen as an inspiration for their ballet dancers.

“It’s very motivational for our dancers to see someone who has come from Georgia, South Carolina, the South and made it in really, the biggest ballet company in the nation,” Orr said.

“He is very kind, very genuine and has been in New York City for years now, and they can see that he’s just the same person we met [years ago].”

Davis is currently working with three different age levels of dancers: sixth grade, seventh through ninth and tenth through twelfth. All of them are working hard for the showcase, he said.

“They’re putting a lot of work together in a week’s time.”

When it comes to dancing on stage, Davis knows a little about musical theatre, but mainly performs classic ballet.

“Sometimes we can do a little bit of musical theatre stuff, but it’s mostly classical ballet, but it’s never what you see on Broadway,” he said.

While Davis said he has no favorite performance with the ABT, he thoroughly enjoyed doing ‘Romeo and Juliet.’

“It’s a really amazing adaptation to the ballet. I loved reading the story in high school, but getting to portray it on stage is a lot different,” he said. “The music is really great and we get to work with all the choreographers from the world is really cool.”

Davis learned the role of Paris, although he thinks playing Romeo would be great.

“I would love one day to get to do Romeo, that is one of the most challenging roles for a man.”

Davis said he is glad to be back in town, where he spent his day last Sunday at West Point Lake, his favorite place in the area.

“I’m just happy to be here, LaGrange is a very beautiful city to me,” he said.

Students dress up for success