Back to school event gives back 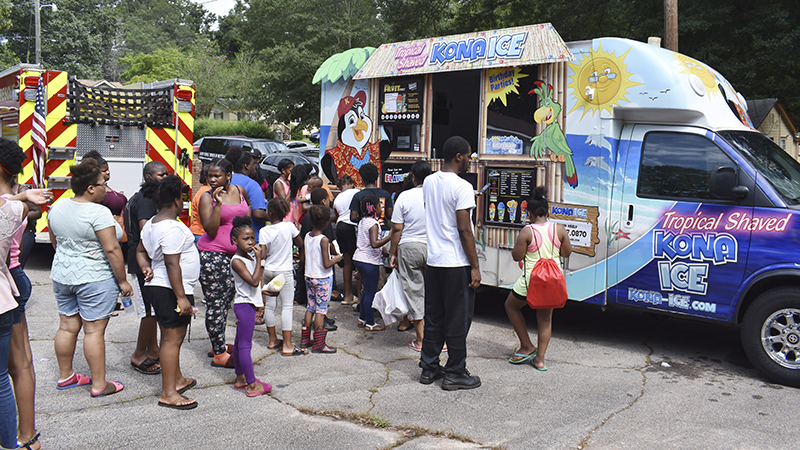 The Kona Ice truck was a popular place Saturday during Anointed by Faith Ministries’ sixth annual back to school fundraiser. --Gabrielle Jansen

Anointed by Faith Ministries held its sixth annual back to school event to benefit financially struggling families at its church on Saturday. The event gave parents free school supplies, backpacks and clothing along with free haircuts and braiding for children.

The event also included free food, a snow cone truck, bounce houses and games, such as ring tossing and fishing.

The Troup County Sherriff’s office and LaGrange fire and police departments were also there, giving safety pamphlets to parents.

Pastor Tifton Dobbs said they hold this event to give back to the community.

“We don’t make any money out of this. These things are mostly from donations,” Dobbs said.

Dobbs said the church plans the event throughout the year and is trying to get other local churches in LaGrange to hold similar events on the last Saturday of July.

“We are trying to get other churches to do the same thing at that their parishes on the same day,” he said. “We all need to do more for the community.”

“I think it’s good for the community because there are kids whose parents don’t have enough money for clothes for kids before they start school,” Talley said.

Cameron said the event is not only to give to families, but to also show support year-round for their parishioners.

“We want to let them know that we are here to support them spiritually, physically, mentally, we’re here as a safe haven for them,” Cameron said.

Dobbs said the event is ultimately about showing that they care for the community.