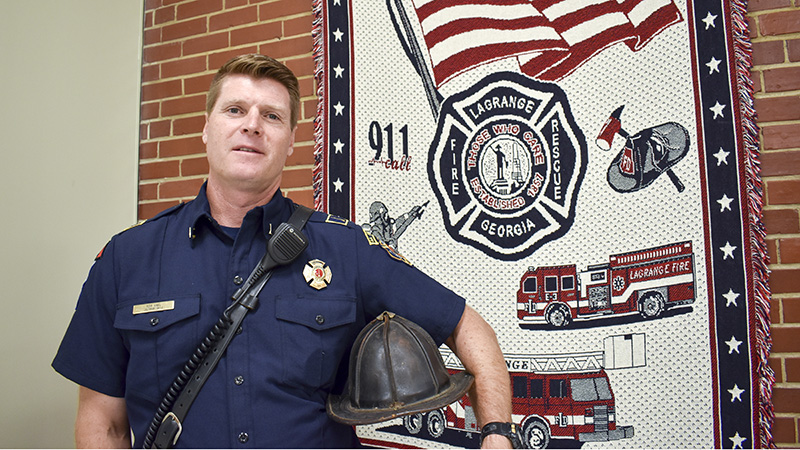 LaGrange Fire Department Lieutenant Rob Vael has been with the department for 10 years, but before he became a firefighter he was a professional baseball player. (Gabrielle Jansen | LaGrange Daily News)

LaGrange Fire Department Lieutenant Rob Vael is throwing strikes when it comes to fire safety in town. The Canadian-born lieutenant was drafted by the Cleveland Indians in the second round of the MLB draft in1997.

“I’m originally from British Columbia, Canada. I went to high school there, grew up and while in high school there, I interned at a fire department there, kind of got me interested in fire service from then on I went to a number of career,” Vael said. “I ended up in the United States when I played professional baseball. I was in the minor leagues and it brought me to the Southeast here.”

Vael made his way up to playing in the double A league for the Harrisburg Senators before meeting his wife and leaving the league. After settling at Pine Mountain, Ga., he joined the LaGrange fire department in 2007.

“I was always under the impressions that you needed to be a United States citizen to work for fire service, but I found out after some looking into it and talking with the [former Fire] Chief Smith at the time, he had stated that ‘no that’s is not the case, grab that packet, fill it out, and go through the rookie school process,’” he said. “I just worked and followed my own plan of where I want to be in progression up the ranks, I was promoted to lieutenant in July 2016, when the training position became available, and here I am.”

Vael said he plans on becoming an American citizen and, while he misses the mountains in Canada, he enjoys LaGrange and the Southeast because of its charm.

“I had an opportunity through my baseball career to travel much in the United States and all of Canada growing up. I’ve seen the different cultures and the Southeast is the most unique out of all of them,” he said. “I was just drawn to the Southeast, not for the weather, but more so just because of the rich history here, just the genuine feel of the folks down here.”

As a lieutenant, he works under the chief of training, John Brant, and coordinates the training and ensures the proficiency and competency of suppression personnel.

He said that while he doesn’t consider himself a hero, he thinks highly of those in this service.

“It takes special people to do this job and I really look up to them.”

When not at work, he coaches his sons’ baseball teams.

Vael said he enjoys his job now because of the team dynamic, and because each day brings with it something new.

“This job is so dynamic, every day is different, that’s the attraction,” he said.

While he misses his family and friends back in Canada, he enjoys the company of his friends from the department here.

“One thing I do miss is running into that old high school buddy or someone that you haven’t seen in forever,” he said. “I don’t see anybody from way past, but I have been able to make relationships through the fire service and the fire department here in LaGrange.”

Even though he no longer plays the game, Vael said he follows the Atlanta Braves because their president of baseball operations was his general manager when he was drafted. He has also cheered for the Toronto Blue Jays since childhood.

“I kind of fall into Atlanta and Blue Jays, obviously. I grew up watching them and the Expos,” he said. “In Canada, hockey took priority on television, so you could turn the television knob and I would usually find a baseball game on a French channel and I would just watch it as a kid.”