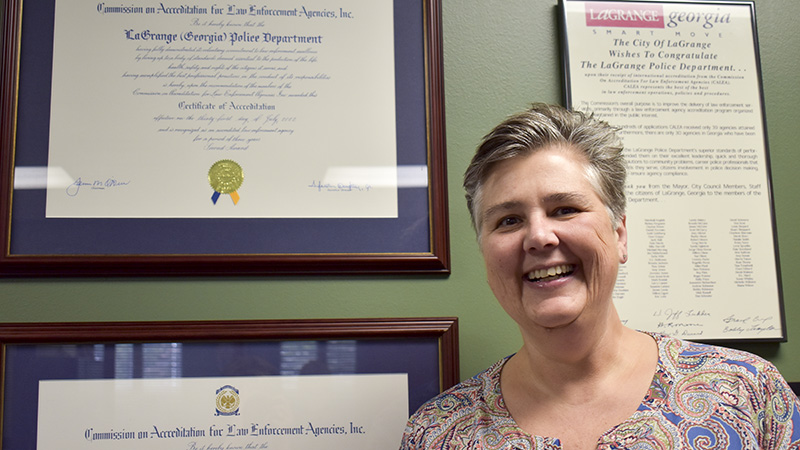 The LaGrange Police Department was accredited for the seventh time in a row by the Commission on Accreditation for Law Enforcement Agencies on Monday. The organization holds standards the department is required to meet to receive accreditation.

Accreditation Manager Sgt. Karen Sanders said the standards include specific instructions regarding reporting the use of force, internal audits and transparency with the media, among others.

“One of the biggest things is that it gives us a roadmap to make sure we’re operating at the upper level of policing. It’s a voluntary process. We do not have to do this,” Sanders said. “It’s based on best practice, case law, to make sure people’s constitutional rights are in practice, to make sure due process is in place. It’s just a set of checks and balances for the department to go by.”

CALEA was formed in 1979 and the department got its first accreditation in 1999.

The program has recently changed to accrediting every four years now along with yearly checks on departments. Sanders said the program is also moving online.

“The difference will be everything is web-based now. Once a year, on our anniversary date, they will log in to our site where our files are and randomly check to make sure each year that we are staying in compliance,” she said. “There will be a team that will come in every four years and sit down and go through the department, talk with the officers, ride with officers and make sure that not only do we say we’re doing it, but we can demonstrate and show them that we’re doing it.”

Sanders said this accreditation changes nothing for the department, since they have always held their own standards, such as using body cameras.

“A lot of the stuff they do but don’t understand it’s tied to a standard because it’s tied to a business,” Sanders said. “We’ve been wearing body cameras for 12 years probably.”

Sanders said the department is motivated to get accredited because it cares for the community.

“Our community deserves it from us,” she said.

The next accreditation will come in 2021.